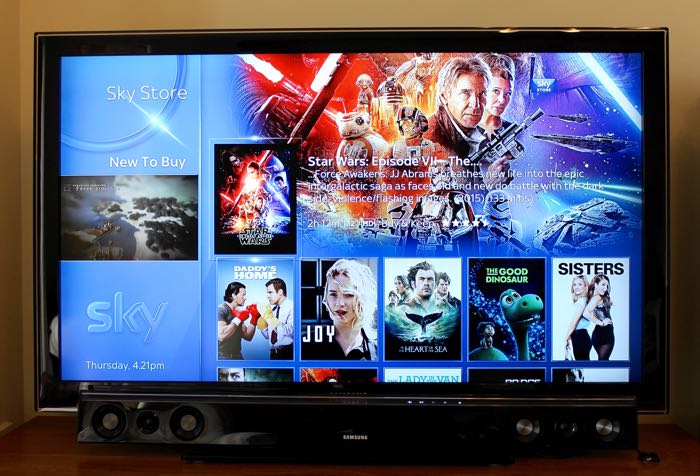 Sky Q is Sky’s latest TV service and the company has released a new set top box and companion boxes that can bring Sky’s TV content to every room of your house. We have been testing out Sky Q here at Geeky Gadgets for just over a week, so we thought it was about time to let you know our first impressions on Sky’s new TV offering.

Sky have made a number of changes over their older Sky+ HD, whilst a lot of the content is the same, it is the way you can watch it that has changed with Sky Q. Sky have come up with some new set top boxes to deliver their content around your home and what they now offer with Q is certainly impressive.

Sky Q is 4K ready, this means that the hardware is capable of showing Ultra HD movies an TV shows and 4K content is coming to the platform this year. In order to get the 4K content on Sky Q you will need the Sky Q Silver box.

In the setup that I am testing out we have a new Sky Q Silver box and two of the Sky Q Mini boxes in other rooms, this is paired with broadband from a third party and the system works flawlessly with my WiFi router, Sky also offer their own WiFi router with the system if you are a Sky Broadband customer. 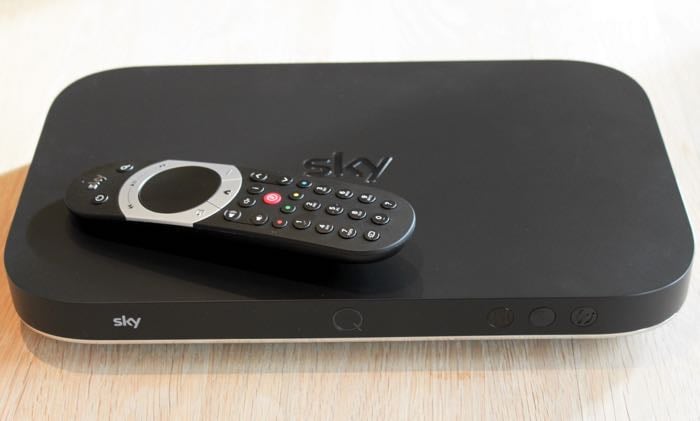 The Sky Q Silver box is the company’s high end box, it allows you to record four TV channels at once whilst watching a 5th, it also comes with 2TB of storage and you can stream your content to two tablets. 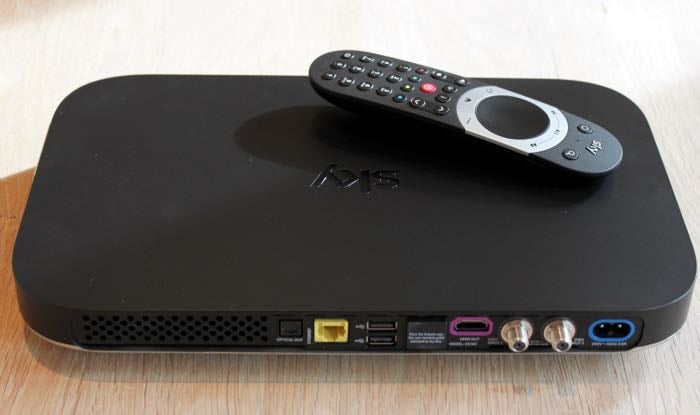 We have two of the Sky Q Mini boxes in other rooms and unlike Sky’s previous multi room system, no wires are needed to connect the devices, instead they connect to the Sky Q box via WiFi, all of the boxes connect to each other and work together to provide a reliable WiFi signal to allow content to be streamed seamlessly around your home.

Sky offer another option, the Sky Q Box, this comes with 1TB of storage and will allow you to record 3 shows at once whilst watching a 4th, there is also the ability to stream the content that you have recorded to a single tablet and Sky Mini boxes. 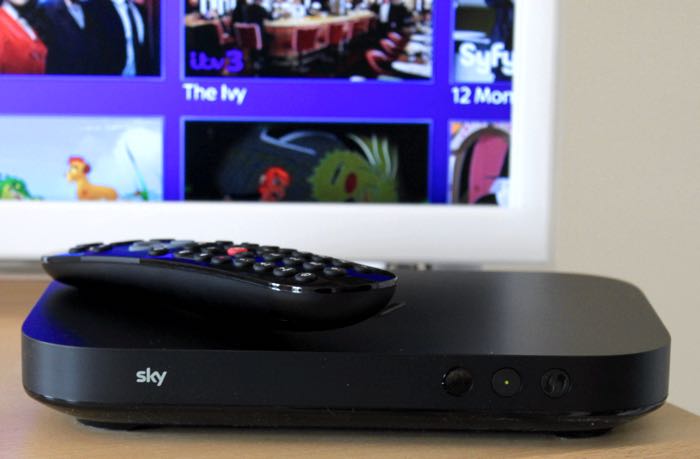 Movies and TV shows that you have recorded on the Silver Box or the black box can be streamed direct to the Mini boxes, you can also watch different channels on each box at the same time, this comes in handy if your family doesn’t want to watch the same show at the same time.

Another great feature is that you can watch a recorded show in different rooms at the same time, if you are already half way through watching a show in one room, someone can watch it from the start in another room.

Sky Q also comes with something that Sky calls Fluid Viewing, this allows you to watch a recorded show you are in the middle of watching on another device, for example you can switch from the main Silver box to your iPad or to one of the Mini boxes and pick up where you left off. This feature is only available on recorded shows it is not available on live TV at the moment.

Sky has also launched a new remote with Q and whilst it looks like a simple remote, it comes with a number of features that make it much more user friendly than the previous remote. 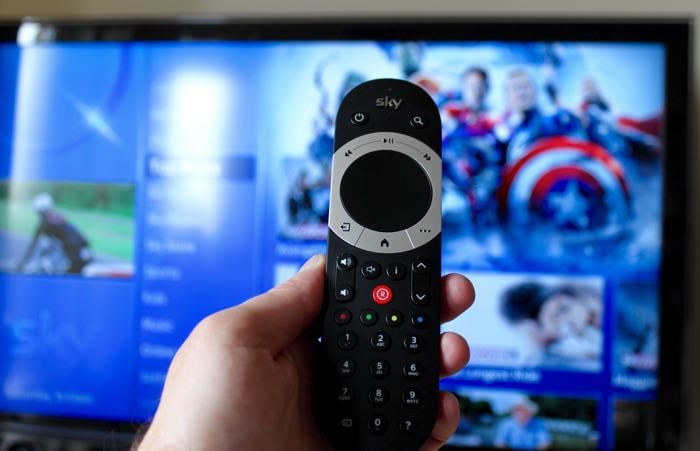 The new Q Remote features a large round touch panel at the top, this is used for navigating the menus and whilst it takes a little while to get used to, once you have been using it for a while, it brings a much improved remote experience over the previous remote.

Surrounding the circular touch panel are a range of buttons for various features like Home, Back and one to launch the built in apps on the system, at the top are the rewind, play, pause and fast forward buttons these are all touch buttons that are designed to make the system easier to control. 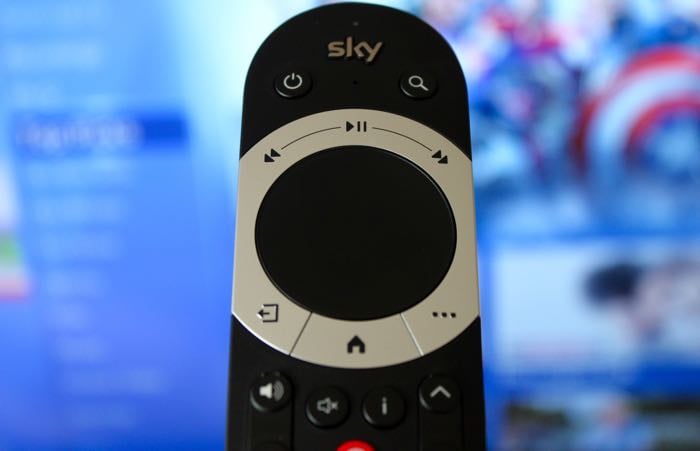 As with the touch panel these buttons takes a little getting used to, after that, they make things so much easier for fast forwarding and rewinding recordings and also live TV.

To rewind or fast forward you just swipe your finger left or right on the panel and then keep it there until you reach the part in the program you want to watch, remove your finger and the show plays instantly I find this much easier than the old remote as I could never get the show to stop in the exact place I wanted first time.

The new Sky Q interface looks nothing like the old Sky HD Electronic Program Guide and that’s a good thing. Sky have given their menu system and UI a major upgrade over the previous interface and it comes with a range of features and a cleaner, updated, more user friendly UI that is more fun and easier to use than the older one, this is a huge improvement over Sky HD. 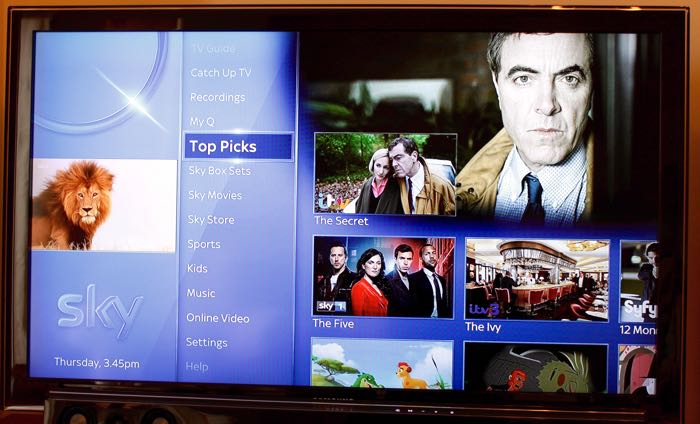 Sky has a vast library of on demand content and this is a feature which has been brought to the forefront on the new user interface, it is a lot easier to find a show you want to watch compared to the old system.

There are a number of different sections which have been designed to make is easier to discover content, this includes Top Picks which shows you the most popular shows at the moment, there is also a My Q section, plus sections for Movies, Sports, Music, Kids, Catch Up TV and Online Video. 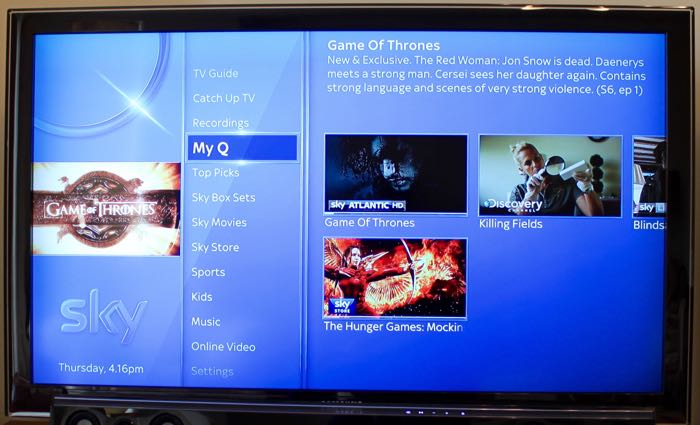 The My Q sections showcases content you have recorded,  shows you are in the middle of watching and also it recommends content that you make like based on what shows you have watched in the past.

There is an updated TV guide which shows you what is on live TV and what is coming on in the future, it works in a similar way to the old one, so previous Sky HD users will be familiar the menu system. 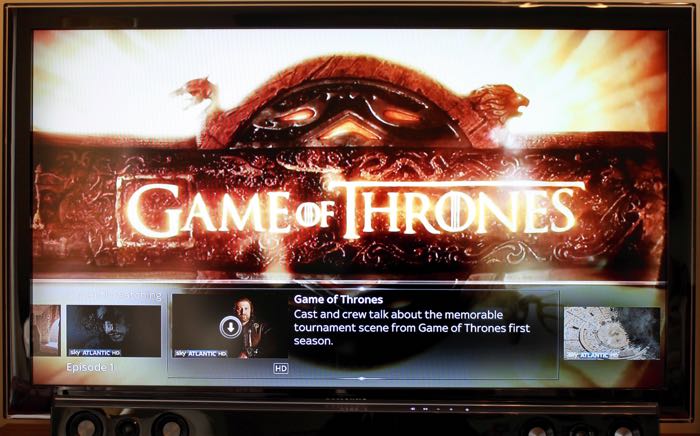 Another new feature is when you press ‘i’ on your Sky Remote it will show you a synopsis of the show you are watching, whilst this is on, you can move up and down the various channels and it will show you information on the next channel, there is also a picture in picture feature in this menu that shows a live preview of what is on the other channel. This can also be activated by press the center of the round touch panel.

If you are watching a box set on demand you can press the ‘i’ button on your remote and then move to the right to find out information about the next episode and then start watching it, this is a handy feature as it means you don’t have to move around the menu again like on the older system.

Sky Q Apps on your TV 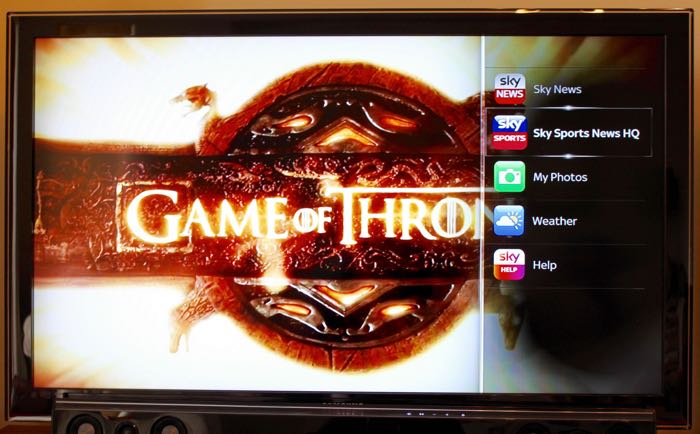 Sky has also added in Apps to their new user interface, these include Sky News, Sky Sports News, My Photos, Weather and Help. 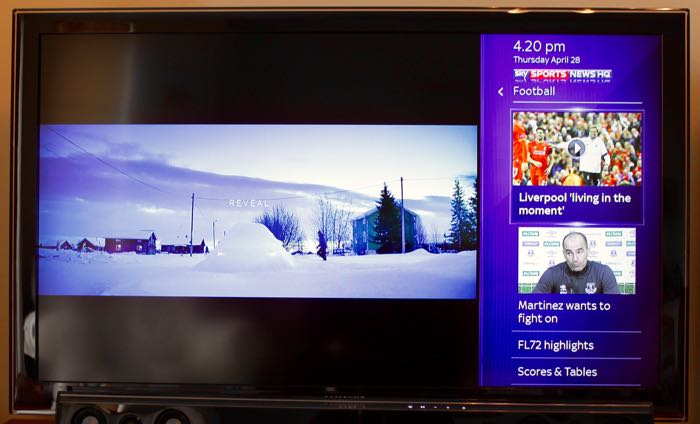 The Sky News and Sky Sports News will show you information on the latest news for those topics and you can watch videos from within the apps. 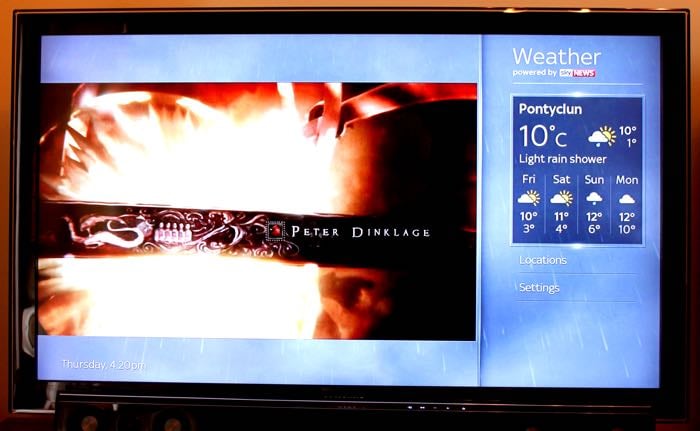 The Weather app shows you the latest weather based on your location and you can also see what the weather is like for the week ahead. There are only a few apps available on the system at the moment, although this could be something that Sky changes in the future.

Sky Q on other devices

Sky has also launched a companion app for tablets, this allows you to watch TV on your tablet and also watch your recordings that are stored on your Sky Q Box, in order to stream recordings from your box you have to be on the same WiFi network. 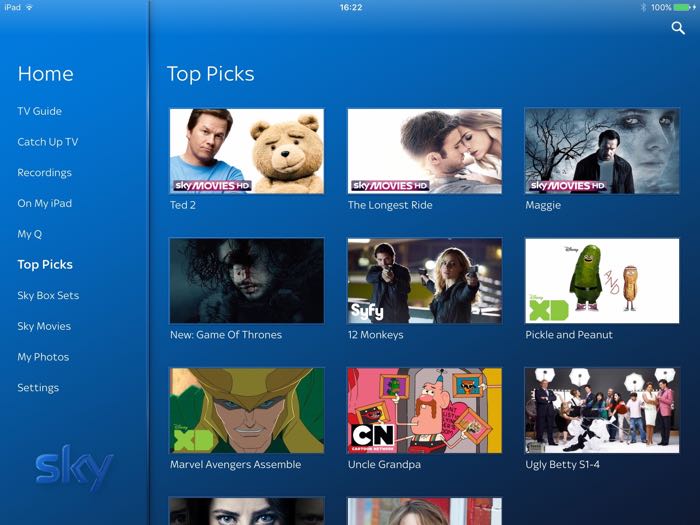 If you want to watch content on your tablet away from your home, this can be done in the app but you need to download the content to your device first.

Not all content is available to download on your iPad or Android tablet for example if you have recorded a show on say BBC1 or BBC 2 this can not be downloaded to your device due to right issues, but they can be streamed to your tablet. 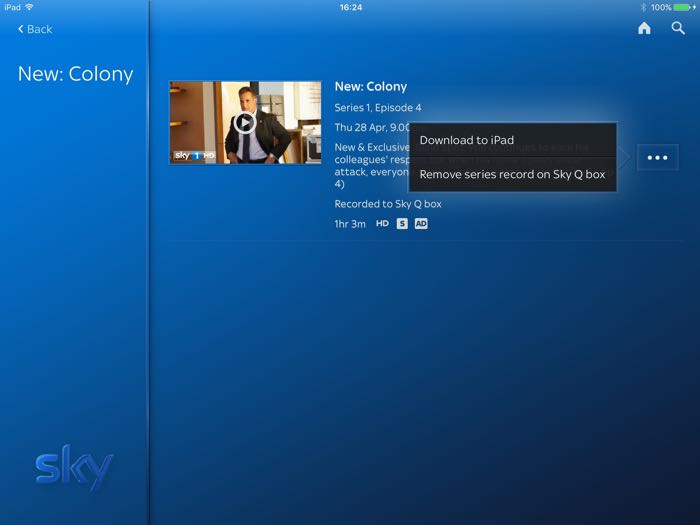 This is a great feature and it brings more content to your tablet that the previous Sky Go app as you can now stream and download the majority of your recordings to your device.

Sky have added some amazing features to their new Sky Q system, it is a lot more user friendly than Sky HD and the new UI and the multi-room features along with the ability to also watch content on your tablet make it a great upgrade. 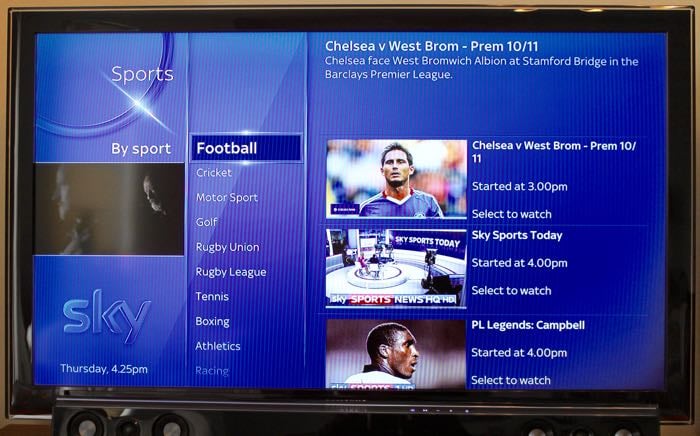 We will be testing out Sky Q thoroughly over the next few weeks and will publish a review of the full system once we have had a good chance to test out all of the features.

You can find out more details about Sky Q at the link below, prices for the system start at £44 a month for the Sky Q system with 1TB of storage and the 2TB Sky Q silver system starts at £56 a month. There are also one off costs for the equipment.