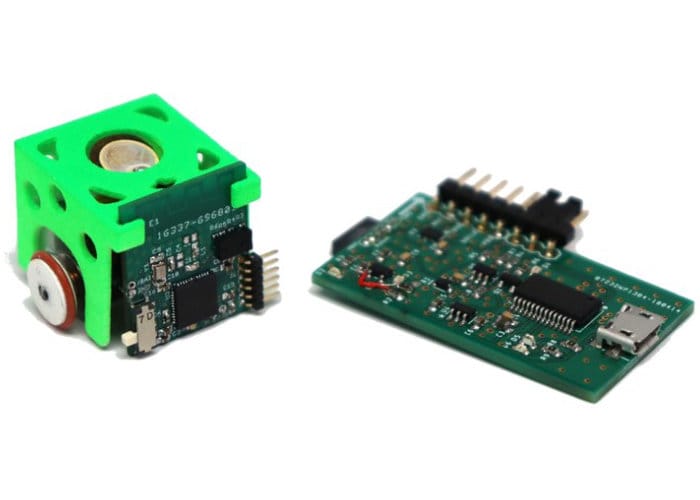 William Weiler Engineering has created a tiny programmable robot called the Skoobot which is equipped with a Bluetooth Low Energy wireless connection and is powered by a 32 bit processor. The tiny robot is also equipped with a distant sensor, microphone and buzzer and can be controlled using a Raspberry Pi mini PC or Android smartphone.

SkoobotIs now available to back via Crowd Supply with pledges available from $99 for the basic Skoobot Robot package. Its creators explain more about the inspiration and design of the small programmable robot. “Skoobot is fun to play with and suits my needs as a hacker toy. It is also great for games and swarms of multiple Skoobots. The idea for Skoobot came from watching kids at an ADHD camp interact around a game of fighting spinning tops. Older kids were involved and engaged with the younger ones. They chatted freely about the tops and the games. I realized I could do the same, maybe better, with something more sophisticated and focused, perhaps involving ideas from education and ADHD research. When I left my last company, I decided to use my engineering skills to help these kids. From this, Skoobot was born.”

“I gave Skoobot a microphone and a processor powerful enough to handle the math needed for spoken word recognition. I gave it a buzzer to create meaningful feedback to the user. Once the children are drawn in by the cuteness and novelty, I direct them towards a cooperative game, with each child taking a turn. The game could be to solve a maze, or to help the robots communicate with a beep-based language. The cooperative game will be optimized for fun and social learning. The projected schedule is to have a prototype game for testing within a month after the campaign ends, then iterate with students and have a production-level game in six months.”

For more information and full specifications jump over to the Crowd Supply website via the link below.