Those of you that have enjoyed playing Laser Tag games in the past or still do, might like this new Skirmos open source Laser Tag system created by the company Skirmos.

The Skirmos open source Laser Tag system has been designed to allow you to enjoy your first-person shooter (FPS) video game in real life, and has been created to be played either in or out doors. Watch the video after the jump to learn more about the Skirmos project and see how it played. 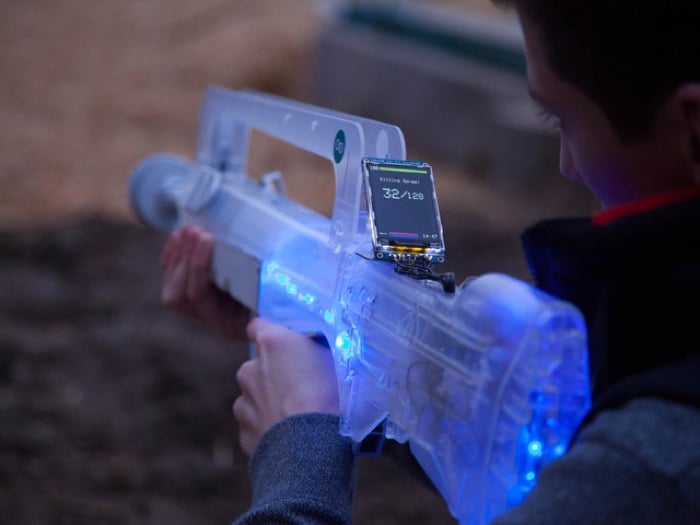 “It’s a summer night, and you’re playing an intense game of territories inside a misty forest. Your team is rushing the enemy’s base to capture the remaining territories, while you flank. You glance at your gun’s LCD screen; full health and ammo, and your team is down three territories.

You quickly capture a nearby objective and receive an overshield; your gun instantly glows red to indicate it. Two enemies poke out of the trees on the right, you raise your gun to aim, and out-shoot them both. Simultaneously, your team successfully captures the remaining objectives. You win! Skirmos is the ideal game you’ve always wanted to play.”

“The photos and videos shown in this project are prototypes. If we are successful in securing funding, we will CAD and print our own system design. The system isextremely safe and cannot be mistaken for weapon replicas. The system has a transparent design with bright RGB LEDs that change colors (Stretch Goal).

We, Skirmos, in no way will design the system to replicate real weapons. Our final system design will not match a real gun’s shape, it will contain no magazine, and will not have the key features of a real weapon; while still maintaining a great looking design. The Skirmos team has acknowledged Kickstarter’s specific guidelines and will not sell or promote weapon accessories or replicas.”

The Skirmos project is currently over on the Kickstarter crowd funding website looking to raise enough pledges to make the jump from concept to production. So if you think Skirmos is something you could benefit from, visit the Kickstarter website now to make a pledge and help Skirmos become a reality.