The Soviet/Russian space program never gets the credit it deserves. It not only sent a man into space first, but also built sturdy rockets, a rugged orbital space station that lasted ages (no matter how much Hollywood lampooned it) and space suits that are a cut above NASA’s. 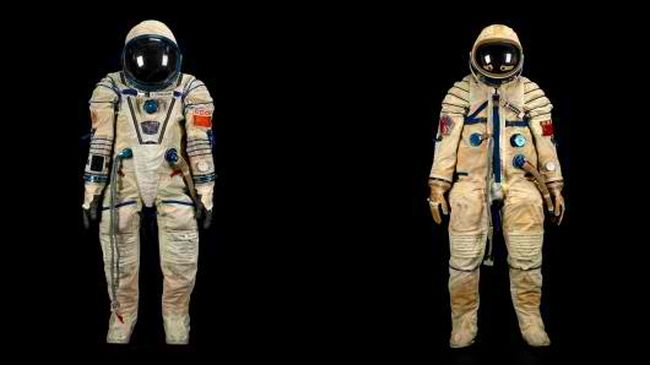 Pictured up north are two Sokol space suits worn fifteen years apart. The one that’s brown with age to the right was last used during an Apollo-Soyuz mission in 1975. Its opposite went to Mir in 1990. Both are to be auctioned at Bonhams, New York come May 5 to commemorate Alan Shepard’s  Freedom 7 mission. Kinda strange though, celebrate an Astronaut achievement with the sale of Russian stuff.

The 1990s Sokol-KV2 vintage suit is expected be worth around $150,000 while its older counterpart the Sokol K half that. No surprise with the priceyness, but we must emphasize what rarities these Cosmonaut suits are. The truth is, contrary to the overwhelming consensus that American technology is superior, Russia tech was/is fully capable of holding its own. The Sokol’s are marvels of design and engineering because they come in a complete suit; there are no sections unlike their American counterparts.

For reasons that are historical, aesthetic, scientific, and nostalgic, these Russian gems should be prized treasures of whoever coughs up the money to pay for them.