Samsung Galaxy S5 Zoom is rumored to be in the pipeline of the Korean OEM, and we’ve seen a leaked image of the device as well. The device is expected to see the light of the day in the coming weeks, but there’s no confirmation from Samsung as of now.

Recently, some specifications of the alleged Samsung Galaxy S5 Zoom were leaked, as well as some AnTuTu benchmark results, showcasing the performance of the handset. 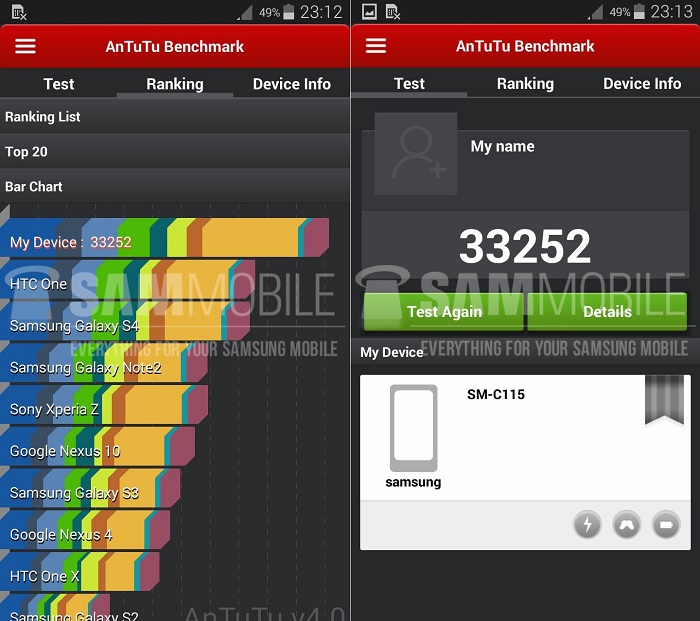 Let’s just come over to the specifications first. The Samsung Galaxy S5 Zoom comes with a similar set of specifications we’ve seen before, as the alleged handset was also spotted on GFXBench. According to the folks at SamMobile, the purported Samsung Galaxy S5 Zoom will come with a 4.8-inch 720p display, with a 6-core  Samsung Exynos 5 Hexa (5260) SoC with ARM’s big.LITTLE architecture consisting of two 1.7GHz Cortex-A15 cores and four 1.3GHz Cortex-A7 cores.

Other features include 2GB of RAM, 20MP camera with OIS and 10x optical zoom, 2MP front-facing camera, microSD card slot and should ship with Android 4.4.2 KitKat as its operating system.

As far as the AnTuTu benchmark is concerned, the alleged device scored 33252 points, surpassing the likes of Galaxy S4 and HTC One.

We’ll update you as soon as we get some information about the launch of the alleged handset.