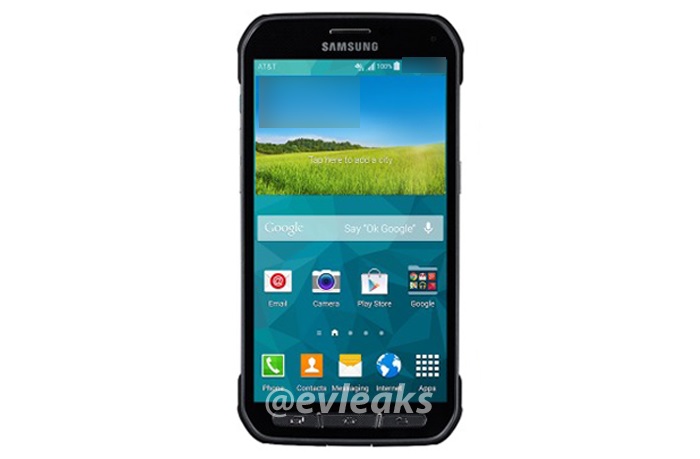 We’ve seen the alleged Samsung Galaxy S5 Active several times in the past few weeks. Earlier this week, we saw a bunch of videos, which gave us a sneak peak at the handset, along with its specifications.

Now, @evleaks tweeted out the unofficial press render of the Samsung Galaxy S5 for AT&T. Well, as rumored before, the handset comes with a rugged casing which is different than the current flagship device. It’s also said to be waterproof with a higher rating, which we’ll be interesting to see once the handset is available.

The purported handset is expected to offer a similar set of specifications as the Galaxy S5, but with a few changes in design. Rumors suggest it will pack a 5.2-inch display sporting a resolution of 1920 x 1080 pixels, with a 2.5GHz quad-core Snapdragon 801 chipset under the hood.

Other rumored features include 2GB of RAM, 16GB storage with a MicroSD card slot for expansion, a 16MP camera for photos and videos, with a 2MP front-facing shooter, and should come with Android 4.4.2 KitKat as its operating system.

The purported device is expected to land on AT&T like its predecessor, but there’s no official confirmation at the moment. We’ll update you as soon as the handset sees the light of the day.