Samsung recently sent out invites for their Samsung Galaxy S4 launch event, which takes place in New York on the 14th of March, and now it would appear that Samsung also has something planned for Times Square for the Galaxy S4 release. 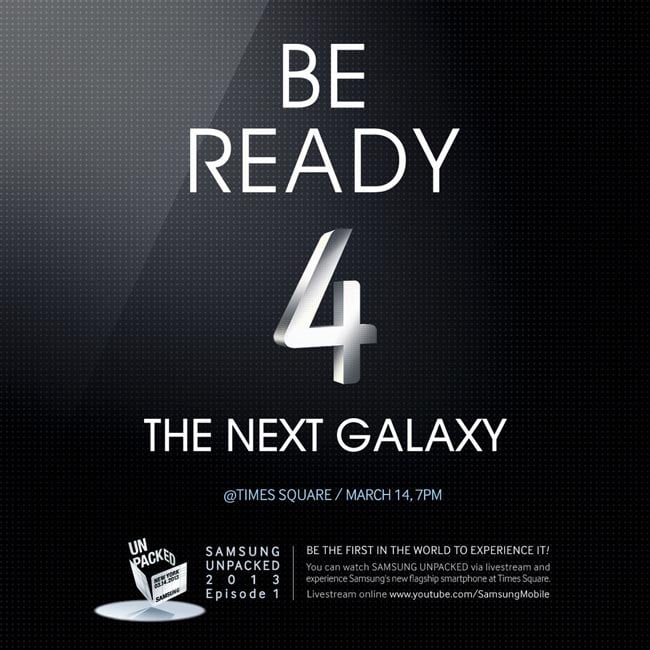 Samsung are obviously hoping that the launch of the Samsung Galaxy S4 will be their biggest event yet, and we suspect we will be hearing more from them on the device and the event before the 14th of March.

Earlier today we heard that there will be two versions of the Samsung Galaxy S4, one for the US which is rumored to use a quad core Qualcomm Snapdragon 600 processor clocked at 1.9GHz and one for Europe with an 8 Core Samsung Exynos 5 Octa processor with a clock speed of 1.8GHz.

Other rumored specifications on the Samsung Galaxy S4 include Android 4.2 Jelly Bean and a 4.99 inch full high definition display with a resolution of 1920 x 1080 pixels, the handset will also feature 2GB of RAM and a choice of either 16GB, 32GB or 64GB of built in storage.

The Samsung Galaxy S4 is also rumored to come with a range of new features, which may include touchless gestures, new eye tracking technology and also Samsung Orb, which is rumored to be like Photo Sphere on Android.

When Samsung announces the Galaxy S4 on the 14th of March, we are also expecting them to announce the relesse date of the handset, which is rumored to be between the 15th and 22nd of April.

Last year when the Galaxy S3 was released it was made available in Europe initially and then launched in the US a couple of months later, we are expecting things to be different this year and suspect Samsung will make the Galaxy S4 available in the US and Europe at the same time.