It does, and Samsung inadvertently confirmed the existence of the Galaxy Tab 4 on the Galaxy Gear Fit page, where the list of supported devices are mentioned. 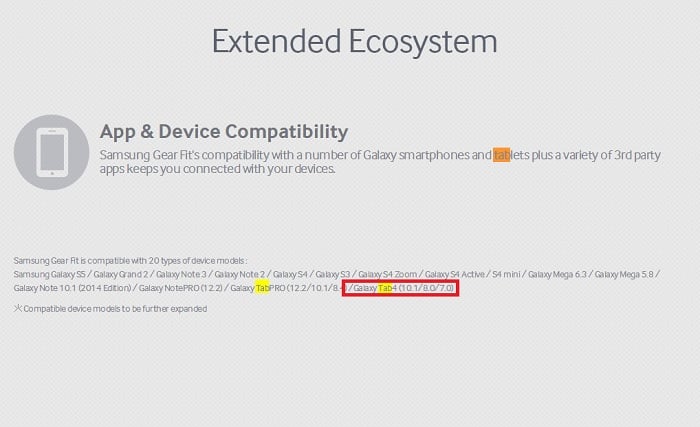 It clearly lists Samsung Galaxy Tab 4, and mentions three screen sizes; Galaxy Tab 4 10.1, 8.0 and 7.0. It shouldn’t take very long as the Korean OEM may launch the tablet any time in the coming weeks. In case you can’t recall, the tablets were spotted at the FCC, which is usually the last stop before they hit retail.

The details about the hardware it’s expected to bring at the table are scarce. All we know is that it will be powered by a quad core 1.2GHz processor and a 6,800 mAh battery to provide a decent battery timing. As far as the software is concerned, it’s expected to come with Android 4.4 KitKat with Magazine UX pre-installed out of the box, but it’s not confirmed yet.

We’ll update you as soon as we hear anything about the purported tablets.