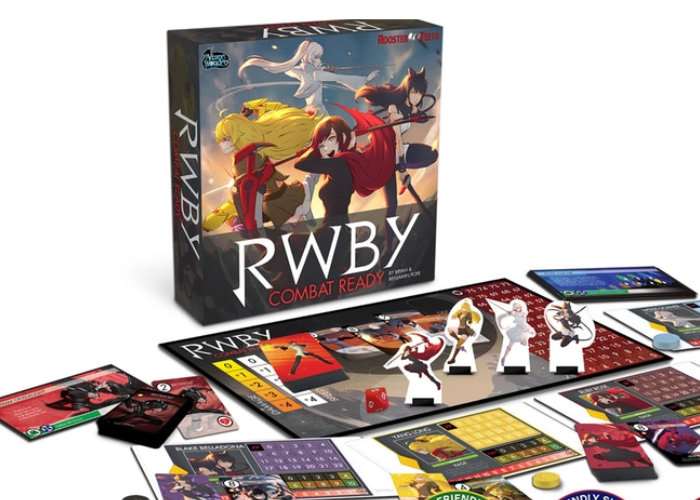 Board game developer Rooster Teeth has launched its second creation via Kickstarter this week which has already raised over $220,000 thanks to over 2400 backers edging closer to its $250,000 pledge goal.

31 days still remain on the RWBY: Combat Ready campaign, for the cooperative board game where 2-4 players join forces to take on fierce RWBY villains and slay monstrous Grimm. Watch the video below to learn more about its gameplay and design.

Here at Rooster Teeth, we have created great shows like Red vs. Blue, RWBY, Camp Camp, and more. We took our first step in the physical game industry in 2016 when we crowdfunded and created the party card game Million Dollars, But… The Game. This year, we’re taking a massive leap forward and trying our hand at a board game.

To leap into the world of board games as strongly as possible, we needed an amazing guide and developer with us. RWBY: Combat Ready is a joint creation between Rooster Teeth and Arcane Wonders, creators of other great board games like Sheriff of Nottingham, Mage Wars, and Viral.

Stories have been written, art has been drawn, and original characters have been created in every shape and form. Now you and your friends can each play as one of the four main RWBY characters. Be Ruby Rose and rise to victory with her Crescent Rose; slice and dice the Grimm as Weiss Schnee, wielding her Myrtenaster; join in and fire from afar as Blake Belladonna with her Gambol Shroud; or leap in and create massive explosions as Yang Xiao Long with her Ember Celica.

We’re making RWBY: Combat Ready, but we’re not able to do this alone. We need your help. We have a game idea, basic pieces, and a board, but we still have the ability to upgrade and mold this game to fit what everyone wants. Better pieces? More creatures to fight or heroes to play as? Every pledge from you amazing Backers can help shape RWBY: Combat Ready to be a board game that RWBY fans and board game enthusiasts alike want to play.