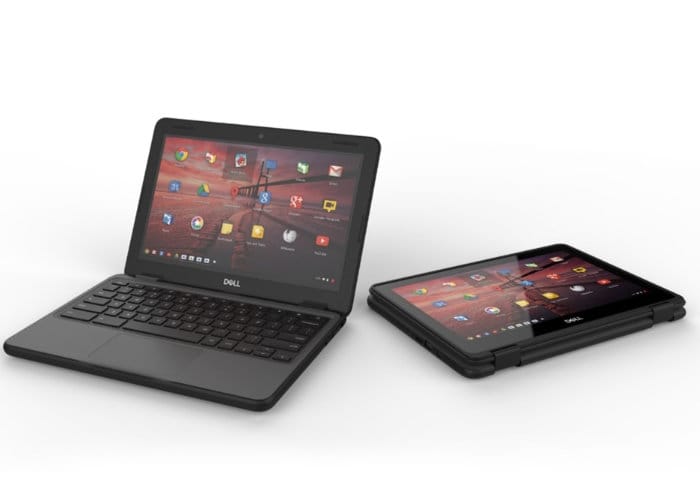 This week computer manufacturer Dell has announced the imminent launch of its new rugged Dell Chromebook 5000 series hybrid, convertible notebooks, designed for students and education. Equipped with an 11 inch touchscreen display and a rechargeable battery capable of providing up to 13 hours of life from a single charge.

The new Dell rugged 2-in-1 laptop has been built to withstand 48-inch drop tests and 30-inch drop tests onto steel thanks to its refined chassis design. Dell also says that they are the first manufacturer capable of claiming its devices can withstand “10,000 micro-drops”. By dropping the systems from 4 inches at multiple angles, Dell reckons they can replicate student device damage equivalent to two or four years usage aiding in the rugged design.

Other features of the Dell Chromebook 5000 series range of notebook/tablet systems include front facing cameras, EMR pen support, for a natural pen-to-paper writing experience and super-fast USB Type-C connectivity. EMR stylus technology allows the digital pen to switch back and forth between two operating modes multiple times per second. First, there is the power mode, during which the sensor creates a magnetic field and sends out a frequency that is picked up by the pen to create the lines. More information on the EMR stylus technology jump over to the Wacom website.

The Chromebook 5000 series is expected to be made available during February 2018 with prices starting from affordable $289 with the launch of the Dell Chromebook 5190. As soon as more information is made available we will keep you up-to-date as always. But for now to view full specifications jump over to the Dell website by following the link below.