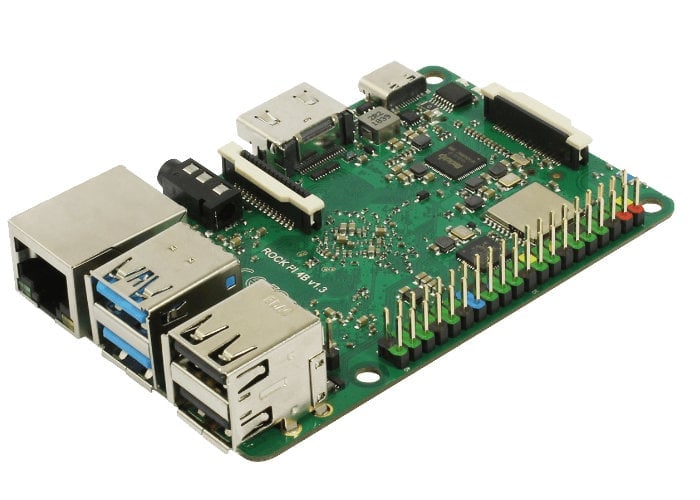 Hardware manufacturer Radax as this week launched its newly updated Rock Pi 4 mini PC in the form of version 1.4, offering a mini PC based on the Rockchip RK3399 capable of running both Android and Linux distributions. The Rock Pi 4 features a six core ARM processor, 64bit dual channel 3200Mb/s LPDDR4 And supports up to 4K@60 HDMI. Other connections include MIPI DSI, MIPI CSI, 3.5mm audio.

Connectivity is provided by support for 802.11 ac WIFI, Bluetooth 5.0, USB Port, GbE LAN and the mini PC supports USB PD and QC powering. Developers and enthusiasts will be pleased to know a 40-pin colour expansion header has also been included And the mini PC is available in two models, Model A and Model B, each model has 1GB, 2GB or 4GB ram options.

The updated Rock Pi 4 v.14 is now available priced at $39 for the 1GB version or $74.95 for the 4GB with WiFi and Bluetooth connectivity. “We have reduced the size of the image so 4MB flash can just include the first stage loader, u-boot and trust image.” – “We ported the RK3399 PCIe driver to u-boot and enabled the boot chain. Android is also supported for NVMe booting, which will come in later release.” The Rock Pi 4 closely matches the Raspberry Pi layout and feature set, but offers the much faster, hexa-core Rockchip RK3399.

For more details and full specifications jump over to the official Radxa website where the new Rock Pi 4 v1.4 mini PC is now available to purchase in all available form factors.