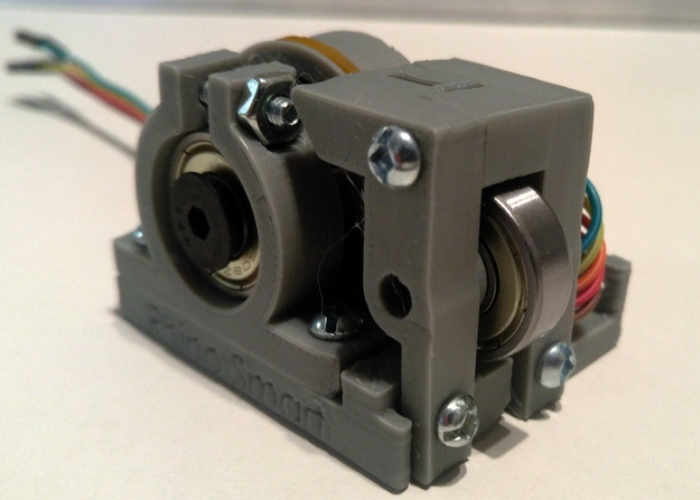 Anyone who has been having problems with a 3D printer extruder ruining prints by either jamming or not providing an even flow of filament. Might be interested in a new smart extruder which is being created by Monirad Robotics based in Toronto Canada.

The Rhino Smart extruder is equipped with a number of useful features such as jam detection and the ability to pause printing if your filament should run out or encounter a problem during a 3D print.

I started MONIRAD Robotics over 2 years ago. With support of over 100 Kickstarter backers we started manufacturing of the Rhino Industrial grade 3D printer around March 2015. I have been developing RhinoPrinter ever since, improving the quality of prints and increasing the reliability. One of the main concerns specialty during a day long print job is running out of filament before the print ends. In case of a small part it is easy to estimate whether the remaining filament in the spool is enough to finish the print but if you have a large print you need to check the remaining filament every now and then to make sure the printer is not running dry. This could be a problem especially if you want to run the printer overnight.
A very simple solution is to use an on-off or an optical switch to detect the presence of filament and pause the print in case the filament runs out. However based on 2 years of experience working with 3D printers another likely case of ending up with a half-finished printed part is when the extruder is jammed.

Jamming could occur due to one of the following.

• The filament gets tied in the spool holder hence the extruder can’t pull it thought.
• Both ABS and PLA filaments absorb the moisture in the air. Excessive moisture in the filament could cause a jam in the nozzle specially when using a 0.3mm or smaller nozzle size during the print.
• The hotend gets clogged due to lack of sufficient cooling on the hotend heatsink.
• The nozzle is too close to the bed during printing the first layer. Or filament diameter is more than its nominal value causing formation of a convex solid layer. As a result there isn’t enough gap between nozzle tip and printed surface during printing the next layer.
• Extruder can’t keep up with print speed.

Due to the above reasons I was looking for a module on my printers that could detect both out of filament and jamming, unfortunately I noticed there isn’t much development in this area. There are products that detect out of filament but fail to pause the print if a jam occurs. Some companies have developed this module but it is compatible only to their own 3D printer brand.

Having feedback from the extruders is a necessity. Hence the goal in designing Rhino Smart was to make it available at an affordable price. The rotary encoder is a standard Arduino switch reinforced with a ball bearing for increased durability and life cycle. The body consists of five 3D printed parts made out of ABS and printed in a printer with heated chamber which would considerably increases strength of printed parts. We will also include 3 sets of wires that allows you to adjust the wire length between 20cm to 80cm.