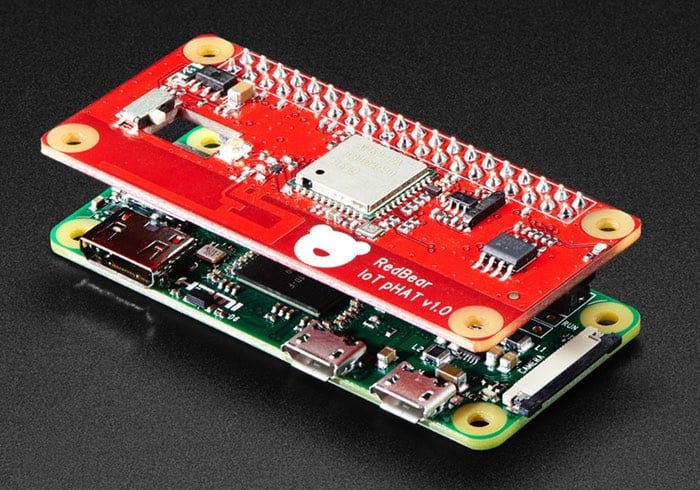 Raspberry Pi enthusiasts might be interested to know that the Raspberry Pi Zero Red Bear IoT pHAT is now available from the Adafruit online store priced at $16.95.

Designed to be used with the Raspberry Pi Zero,’s attached the Internet of Things pHAT and adds both WiFi offering 802.11bgn / 2.4GHz and Bluetooth v4.1 / BTLE.

Adafruit explains a little more about the functionality and specifications of the Red Bear IoT pHAT :

So you’ve got your Pi 3 with its built-in wireless LAN and Bluetooth, but what about your Pi Zero? Say hello to the IoT pHAT from Red Bear! This Zero-size board provides WiFi connectivity direct from the GPIO header. You don’t need to use a dongle plugged into the Pi Zero’s solitary data micro-USB port via a USB OTG adapter. Just snap it on top of a Raspberry Pi Zero (or really, any Raspberry Pi with a 2×20 connector)!

The IoT pHAT provides a neat and convenient way to add WiFi and Bluetooth connectivity to your Pi Zero, while freeing up the USB data port. Using the same wireless radio chip as the Pi 3 results in reliable signal strength and quality via an on-board or optional external antenna.

As with other pHATs, it works with all of the 40-pin Raspberry Pi variants – 2/B+/A+/Zero – but using it with the Pi Zero makes for a super-tiny package.