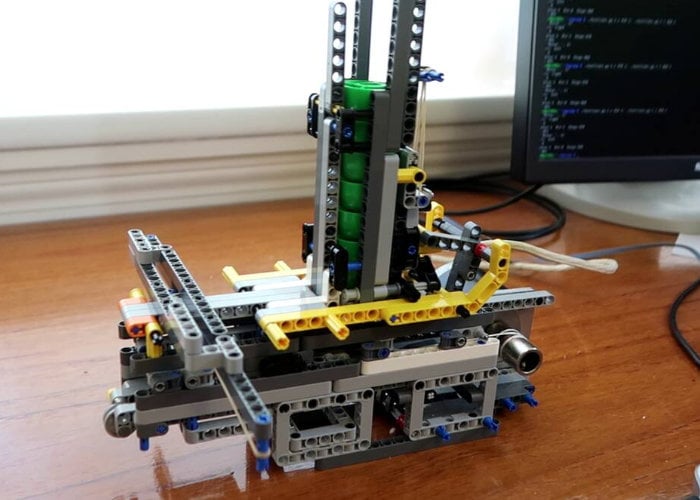 If you would like to guard your office, home or bedroom using a plastic cap firing Raspberry Pi robot turret, you may be interested in a new project published to YouTube this week by Matthias Wandel. Who has combined a mini PC and Lego to great effect to build a robotic computer-controlled turret to help keep unwanted guests from your desk space, area or bedroom. Check out the demonstration video below to learn more about the shooting robot turret.

Matthias explains a little more about the inspiration behind the Lego Raspberry Pi robot turret. “I built this repeating rubber band crossbow for shooting plastic caps a few weeks earlier out of Lego. My goal was to eventually make it so I could control and aim it by computer. I hooked three stepper motor drivers to a Raspberry Pi computer to control it. One driver is for the motor that draws the crossbow. I then did lots of testing with the motorized contraption to get it to work reasonably well, though the whole mechanism is a bit flaky, and it would jam roughly once every 20 shots.”

“I was able to fit a stepper motor for the tilt under the shooter, which made the mechanism fairly compact. Everything will have to sit on another big ring gear for swivelling. But the downward tilt angle was limited by the frames on the bottom of the crossbow hitting the stepper motor. I couldn’t think of a good substitute for those frames because they are the only parts that have alternating holes in different directions. So I just made a “custom” Lego part by cutting a frame in half with a kitchen knife.”

For more information on the Raspberry Pi robot turret and how you can build your very own using a pine mini PC, LEGO and a few other components jump over to the Wood Gears website by following the link below. If you enjoy building Pi projects you might be interested in our comprehensive list of Raspberry Pi displays, HATS and small screens.