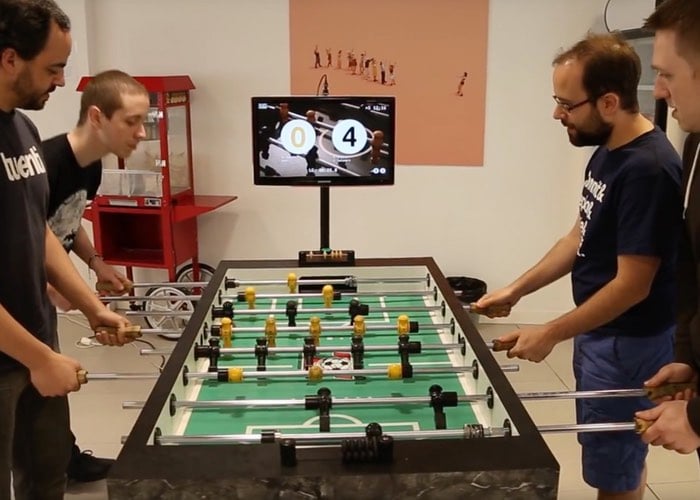 If you would like to bask in the glory when you score a goal on your table football you might be interested in a new Raspberry Pi powered instant replay system which has been specifically created to capture all the highlights of your table football game.

The Foosball Instant Replay system is now available to download from the GitHub website and provides everything you need apart from the hardware and of course the football table to help you set up your system.
To build it you will need a foosball table, A TV, Raspberry Pi to run the UI, The Raspberry Pi camera module to record video together with an Arduino and a few electronic components for the goal detection. The Raspberry Pi Foundation website Liz Upton writes :

So, England, nominally the home of football, is out of the European Cup, having lost to Iceland. Iceland is a country with a population of 330,000 hardy Vikings, whose national sport is handball. England’s population is over 53 million. And we invented soccer.

Iceland’s only football pitch is under snow for much of the year, and their part-time manager is a full-time dentist. I think perhaps England should refocus their sporting efforts on something a little less challenging. Like table football. With a Raspberry Pi on hand, you can even make it feel stadium-like, with automatic goal detection, slow-motion instant replay, score-keeping, tallying for a league of competitors and more. Come on, nation. I feel that we could do quite well with this; and given that it cuts the size of the team down to two people, it’d keep player salaries at a minimum.

For full instructions jump over to the GitHub website via the links below. If you enjoy building Pi projects you might be interested in our comprehensive list of Raspberry Pi displays, HATS and small screens.