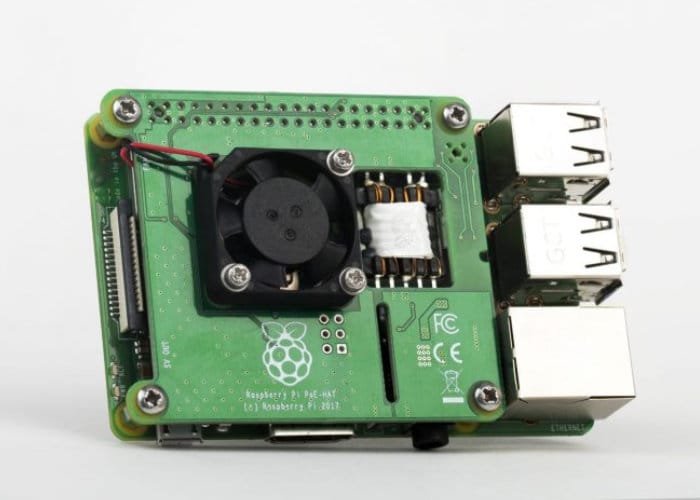 The Raspberry Pi PoE HAT takes the form of a compact, single-sided board that sits within the footprint of the Raspberry Pi. Due to its small form factor the PoE HAT is also capable of fitting inside the official Raspberry Pi case and is equipped with a small 25 mm fan.

The official Raspberry Pi Foundation explains more about their thoughts behind the“We see the product as a useful component for people building systems that may be in tougher environments, so the addition of the fan helps with cooling. The fan is controlled over I2C via a small ATMEL processor which allows for it to be temperature-controlled: when your Raspberry Pi processor hits certain temperatures, the fan will be turned on to cool it down. To enable this you will need to get the latest firmware (sudo rpi-update).”

Because the fan is controlled over I2C, none of the GPIO are used, so you can stack a second HAT on top of the connector. For more details on what you can expect from the Raspberry Pi 3 PoE HAT jump over to the official Raspberry Pi foundation website For full specifications, accessories and setup.