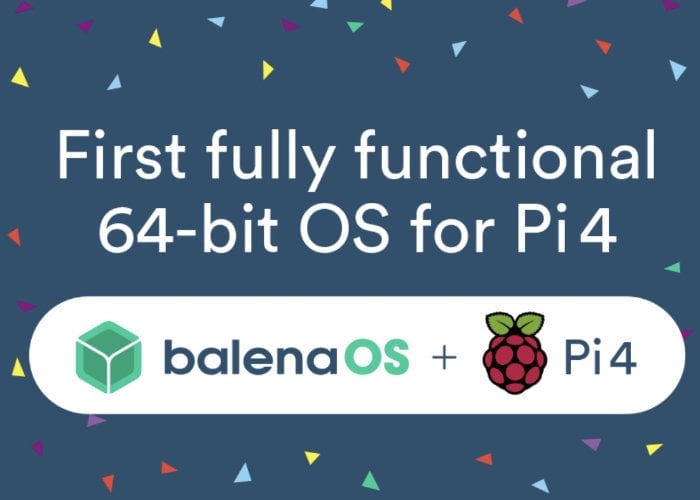 Possibly the very first fully functional 64-bit Raspberry Pi OS has been released by Balena in the form of the BalenaOS operating system which is now available to download and install on your Raspberry Pi 4 mini PC. The open source BalenaOS Yocto Linux-based host OS made for containers is designed to run 32-bit and 64-bit Docker containers side-by-side and simultaneously.

The BalenaOS Raspberry Pi OS also supports up to 4GB of memory, and supports several other embedded systems and other versions of the Raspberry Pi.

“With big improvements in processor speed, data throughput, and graphics handling, the hardware of the latest Pi opens up a new world of possibilities for Pi fans (in more ways than one!). With the release of balenaOS for the Raspberry Pi 4, we’re combining this great new hardware with brand-new software to take full advantage and expand those possibilities even further. We’ve ensured that you can use the full 4GB RAM (where available), that the GPU is supported for hardware video acceleration, and of course that all the features of balenaOS you know and love are present.

BalenaOS provides a development workflow allowing you to push containers to your device, along with everything necessary to reliably support operation of the Docker engine (balenaEngine) in embedded scenarios; that means resilience against harsh networking conditions and unstable power conditions alongside reduced bandwidth requirements. To get you started, we also built a library of over 26,000 base images with a wide variety of distributions and languages, including build and run variants of each.”

For more information on the 64-bit Raspberry Pi OS which is now available to download and install running a mix of 32-bit and 64-bit containers on one Raspberry Pi 4 device, jump over to the official Balena website. If you are interested in learning more about different Raspberry Pi OSes we have compiled a list of the most popular and stable distributions currently available.