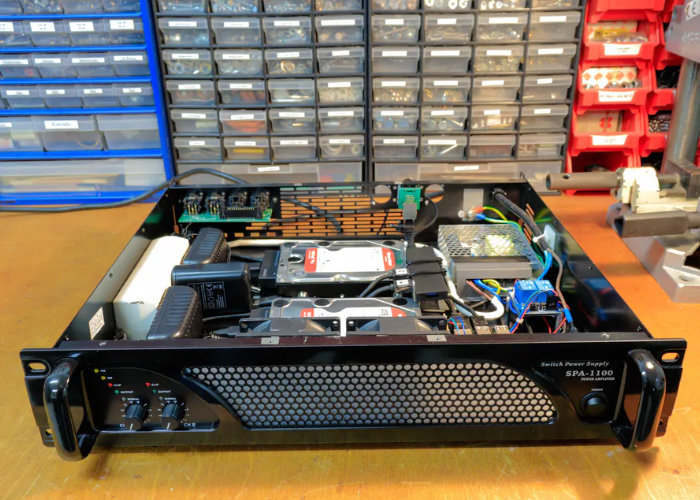 If you are thinking of building your very own personal network attached storage (NAS) system using a Raspberry Pi 4, you may be interested in a new Hackster.io project published by JJandke this week detailing how an old power amplifier was used to how’s the components of the Raspberry Pi NAS.

“I had played around with the NAS feature of my router in the past, but quickly reached its limits. Since then, I was looking for a NAS solution for my whole family. Best to build it myself. I already had a few Raspberry Pis at home and when the PI 4B came out, this was the perfect moment to get this project started. Around the same time, a power amp at my school broke. Since I am involved in sound engineering there, it was no problem to get hold of it. So, I had a case in which all components would fit.

After opening the 19″ case, and removing the actual PCB, I was also able to unscrew the front panel and get access to the fans. Of course, these had to be cleaned first. I decided to further disassemble the front panel and spray paint it completely black. In order for the paint to hold better, I had to sand it down a bit.”

For the full Raspberry Pi NAS project, classed as an intermediate build project taking approximately two days jump over to the Hackster.io website by following the link below. Also check out our article if you are interested in building your very own Raspberry Pi NAS for extra home network attached storage space.