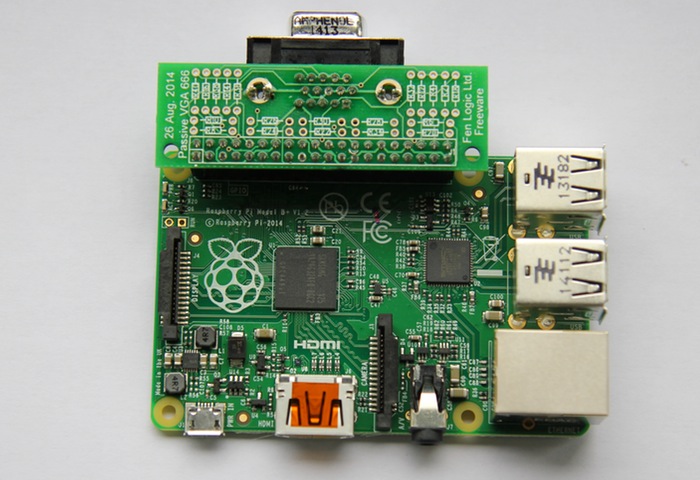 Raspberry Pi Model B+ owners that would like to expand the amount of desktop space available from the single board mini PC, might be interested to know that a new dual monitor VGA adapter has now been created for the Raspberry Pi PC that enables you to use to monitors.

The new dual monitor VGA adapter for the Raspberry Pi Model B+ has been created by Gert van Loo, check out the video after the jump to the learn about this useful adapter.

The adapter uses a simple resistor ladder network as a digital-to-analogue converter, so the colour quality depends on how well-balanced your resistors are. There is slight colour banding, and with 6 bits per channel you have a maximum of 262144 colours.

This wasn’t possible on the Model A or B, but now the B+ exposes 40 GPIO pins, there’s more to play with. As well as just allowing you to connect a VGA monitor natively, it also means you can use it as a secondary monitor alongside HDMI. And unlike composite video, the DPI interface can be run independent of the HDMI.

The software for dual screens is still under development, but we expect that to arrive in the next couple of weeks. Running two screens at maximum resolution will consume SDRAM bandwidth, and is yet to be tested.”

For more information on the new Raspberry Pi Model B+ dual monitor VGA adapter jump over to the Raspberry Pi Org website for details.