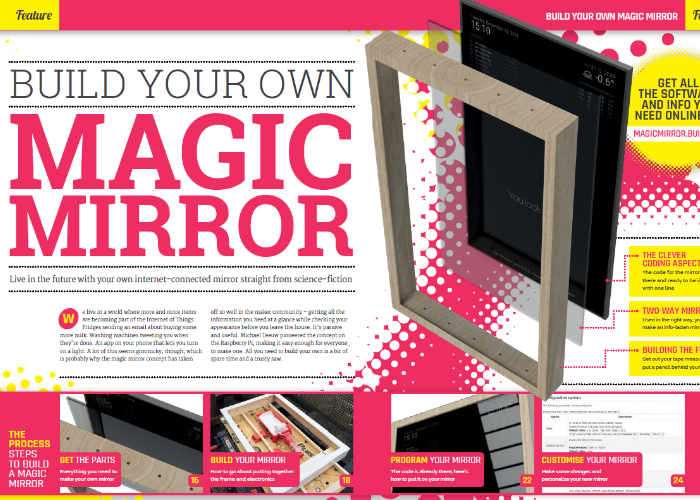 Raspberry Pi enthusiasts looking for a new project to keep them busy, may be interested in a new Raspberry Pi powered magic mirror which is featured in this month’s official Raspberry Pi magazine, The MagPi.

The Pi Foundation has worked closely with Michael Teeuw (the creator of the winning project from the top 50 Raspberry Pi projects poll,) to put together a definitive guide.

• Build a Magic Mirror!
• Our definitive guide to build your very own wonder of IoT and design
• Object-oriented programming
• Follow up from last month’s beginners guide to programming with our OOP guide
• Raspberry Pi is 5!
• Come celebrate the Raspberry Pis fifth birthday this March
• Make a night vision nature watcher
• Create your own NatureBytes that can even take photos at night
• And much, much more!

The MagPi 54 is available in stores now from WHSmith, Tesco, Sainsbury’s, and Asda. Alternatively, you can buy The MagPi online or get it digitally via our app on Android and iOS. There’s even a free PDF of it as well. More details jump over to the official Raspberry Pi website by following the link below