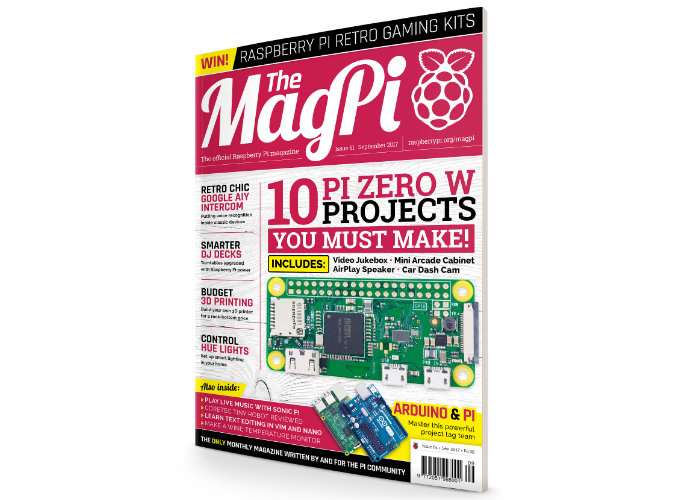 The September 2017 issue of The MagPi magazine is now available to purchase and download both from retail outlets and online, providing ten fantastic Raspberry Pi Zero W projects as well as details on 3D printing on a budget and Google AIY Voice Projects Kit.

Micro Center has opened pre-orders for the Google AIY Voice Projects Kit in America, while in the UK and Europe Pimoroni has set up a pre-order service for £25.

The Raspberry Pi Foundation explain more about what you can expect in issue 61 of the excellent official Raspberry Pi magazine.

In issue 61, we’re focusing on the small but mighty wonder that is the Raspberry Pi Zero W, and on some of the very best projects we’ve found for you to build with it. From arcade machines to robots, dash cams, and more – it’s time to make the most of our $10 computer.

And if that’s not enough, we’ve also delved deeper into the maker relationship between Raspberry Pi and Ardunio, with some great creations such as piano stairs, a jukebox, and a smart home system. There’s also a selection of excellent tutorials on building 3D printers, controlling Hue lights, and making cool musical instruments.