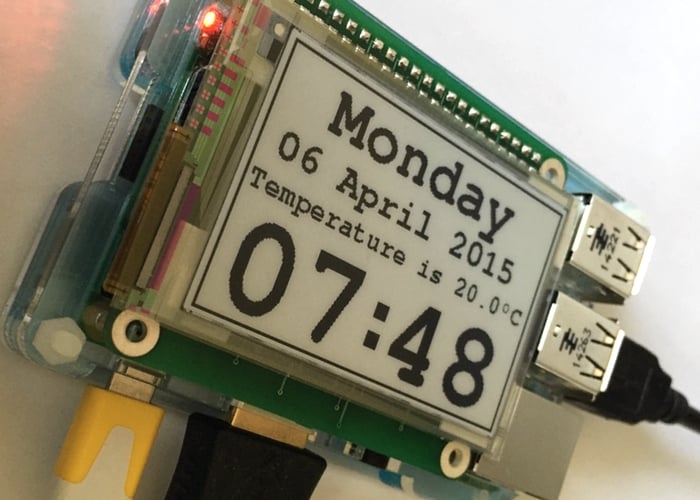 Percheron Electronics have created a new Raspberry Pi HAT in the form of an E-Paper Display HAT that will offer users a low powered way of displaying information.

The Raspberry Pi HAT consists of a E-Paper 2.7” 264 x 176 pixel display that is also equipped with a battery-backed Real Time Clock, accurate to < 3 min/year.

Watch the video below to learn more about the new Raspberry Pi HAT, and learn more from its creators who explains :

“Software to drive the display is available from the Repaper GitHub repository comprising a low level C driver which interfaces to a host of Python demo programmes which you can hack to your heart’s content. It is possible to draw a completely new image to the panel or to partially redraw sections of the display, using functions from the Python Imaging Library (Pillow) and text can be placed using a variety of system fonts in various sizes.

Detailed instructions on setting up the real time clock and on installing and configuring the GitHub display code will be provided. The software is provided under an Apache Version 2.0 licence which gives you plenty of freedom to do what you want with it, as long as you leave the original copyright attributions in place.

E-paper is a low power, high contrast display technology such as is used in the Kindle ®, other e-book readers and the Pebble Watch ®. One of the really nice features is that the display panel keeps displaying whatever image was sent last, even when power is removed. I’ve always thought it would be rather cool to have such a display for the Raspberry Pi”