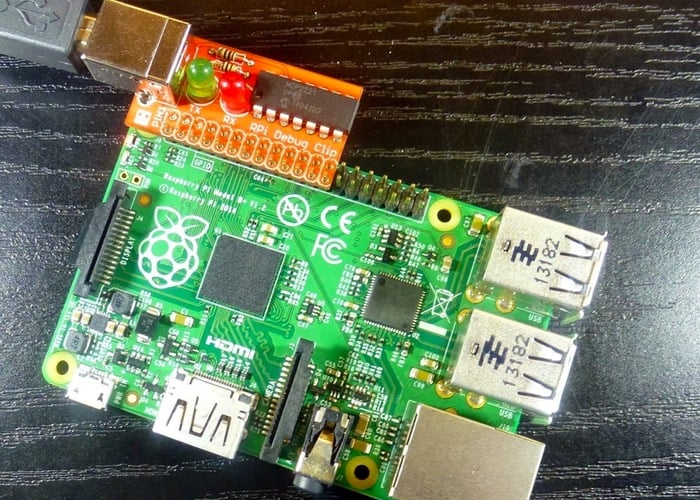 Makers, developers and hobbyists that enjoy using the Raspberry Pi minicomputer to build projects might be interested in a new Raspberry Pi Debug Clip that has been created by Ryanteck based in the UK.

Once installed on a Raspberry Pi, users are then able to launch a program on your desktop PC and access the serial console on the Raspberry Pi mini PC with ease. Its creator explains a little more :

The debug clip is one of the most handy tools for the Raspberry Pi and is ideal for applications where you have no network connection or monitors attached to the Pi. The clip is also great for use with the Model A & A+ due to the one USB Port.”

• Setting up Wi-Fi or Bluetooth Connections.
• Being able to use the Raspberry Pi terminal through your computer without any need of setting up a network beforehand.
• Launching applications on headless Pi’s
• Fixing code on your Raspberry Pi project such as a robot.

“Why use this over a debug cable?  This handy little clip fixes a couple of the issues commonly found with the cables commonly used by most”

• Simpler To connect – Unlike the cables you don’t need to remember where any pins go, just push onto the GPIO, Plug into USB and you’re ready to go.

• Protection! – The final model will also include some extra circuit protection to help keep your Pi & Debug clip from short circuiting.

• Compatible with Other Add-Ons – The clip is designed to be sandwiched between the Pi’s GPIO pins and other add-on boards. As long as they don’t use serial then it should be compatible. whether they have extended headers or not.

• Activity Lights – Most cables don’t provide any way of being able to see any activity between the computer and the Pi. This way you can easily see whether its your computer configured incorrectly or your Raspberry Pi not working.

• Windows tutorials – As well as being simpler to connect and use were going to write a full tutorial to show you how to quickly get running with the clip on Windows.

• Windows 8/8.1 Drivers – Many cables don’t have Windows 8.1 drivers or require a work-around. This clip uses a IC which has Windows 8.1 Drivers and installs in around 10 minutes. We’ve written a full guide on how to install the drivers which will be available on the documentation page. For Windows 7 the drivers install automatically for you.

• Mac & Linux Installer – We’ve also made a handy Linux and Mac Installer which downloads the software required automatically, detects the port that the debug clip is on and automatically launches it by just running a command from the shell!

For more information on the new Raspberry Pi Debug Clip jump over to the Kickstarter website for details via the link below.