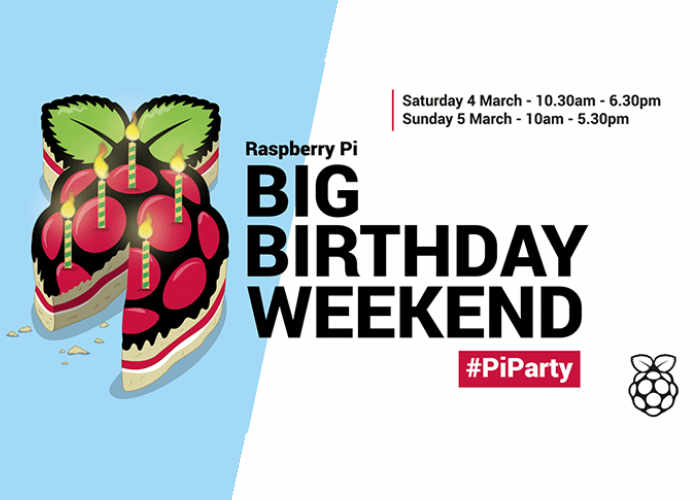 Raspberry Pi enthusiasts will be pleased to know that the official Raspberry Pi Foundation has today announced details and dates for next years Raspberry Pi Birthday Weekend 2017 celebrations.

The celebration will be held at Cambridge Junction (a five-minute walk from Cambridge train station), on Saturday 4 March from 10:30am to 6:30pm, and on Sunday 5 March from 10:00am to 5:30pm. It will feature talks and workshops for which you can sign up, as well as drop-in sessions that allow you to get hands-on without the need to register, so there’s something for everyone. There will even be cupcakes and free goody bags for all partygoers! Tickets cost just £5 for over-16s, and under-16s go free.

Join the Raspberry Pi Foundation team and a host of volunteers from our community as we celebrate another exciting year of putting the power of digital making into the hands of people all over the world.

Raspberry Pi and Code Club will be both turning five, and we’d love for you to come and see what Raspberry Pi is all about, try some of our Code Club projects, and learn what we’re doing to support educators teaching computer science.
We’ll have talks and workshops covering multiple subjects and interests, show and tell stands showcasing incredible creations, vendors exhibiting their kits in the Maker Market, and even goody bags and cupcakes throughout the weekend, with content suitable for everyone whatever their age or experience.

The full programme will be available in January, including a link to sign up to workshops which are registration-only. In the meantime, if you haven’t been to a Raspberry Pi party before, check out the blog from last.

For more details jump over to the official Raspberry Pi Foundation website via the link below.