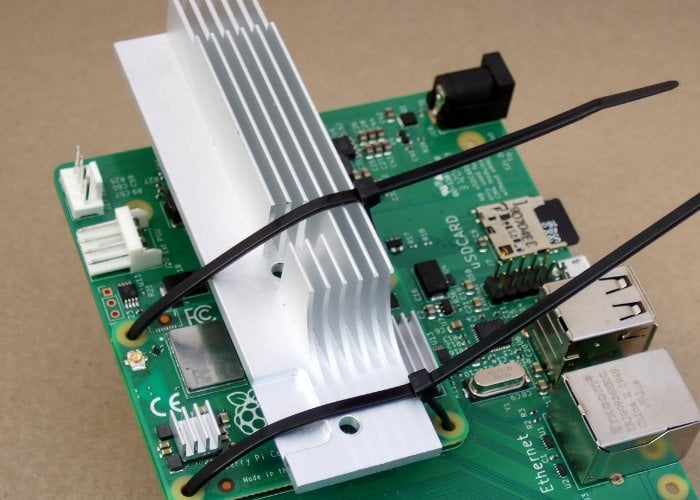 Elliot Williams from Hackaday has answered a number of questions about overclocking the latest Raspberry Pi 4 mini PC and compute module. Putting both systems through their paces using an oversized passive cooler. One thing that has been discovered and perhaps you already might have thought is that cheaper heatsinks don’t really help cool the mini PC under load. Williams explains a little more about his testing process and results using different low-end heatsinks on the Raspberry Pi 4.

“First, I thought that adding the small heatsinks to the CM4 would get it up at least into the 1.8 GHz region that the Pi 400 runs stock. And the answer was a definitive “kinda”. Where before it was on the edge of throttling at 1.5 GHz, the small aluminum wonder got it running at 1.8 GHz, on the edge of throttling. An improvement for sure, but not a good life for the SOC to be living.”

“For science, I put another cheap heatsink set on the Pi 4B and ran it at 1.8 GHz. This is as close to an apples-to-apples test of the two revisions (“B” and “C”) of the SOC as is possible — both boards had free air circulation, with the fins of identical heatsinks, oriented vertically. But overclocking isn’t kind to the Pi 4B. It got up to throttling temperature after just five minutes. Worse, it throttled so much that it ran at an average 1.5 GHz, no faster despite consuming more power and heating up my office.”

“The Pi 4B is easiest to integrate into projects, the CM4 is easiest to break out all the system’s features if you’re designing your own PCB, and the Pi 400 is seemingly aimed at the consumer market, but it has a dark secret: it’s an overclocking monster capable of running full-out at 2.15 GHz indefinitely in its stock configuration.”

For the complete Raspberry Pi overclocking results over to the Hackaday website by following the link below.