For the simple fact that it’s neither radioactive nor can it measure radiation like a Geiger counter. Seen below is a very 80s inspired concept for a gimmicky timepiece that does just that—tell time. Ignore the “readings” and the symbols. All this watch is capable of is give hours and minutes. Since there’s no dial, the time is indicated on the long bars at the bottom and the five minute red-orange-yellow-green pattern on the upper left. There’s minutes to the right—the radioactive symbol. 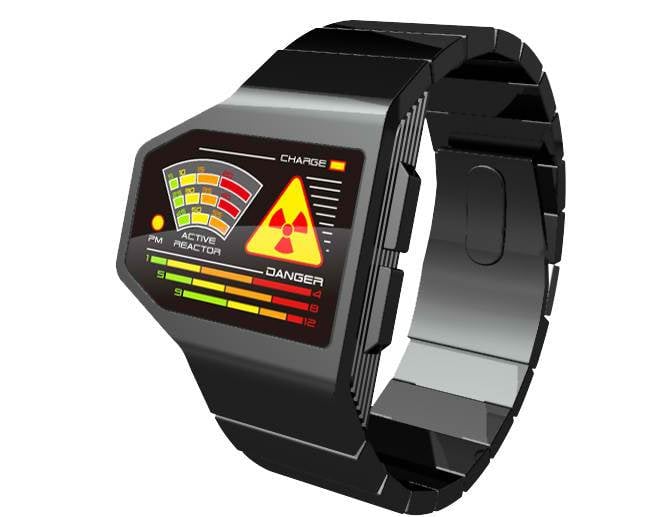 Of course, being a concept, it won’t be put in production any time soon. It’s also pretty obvious that the Fukushima-Daichi meltdown is the inspiration for this non-gadget, which really is a dull watch. The worst part is, aside from its dated Bladerunner-era aesthetic, it’s rechargeable. A rechargeable wrist watch? Great.

According to Tokyoflash, the design studio that has the bad habit of showcasing oddball concepts, the Radiation Level LED’s backstory goes:

This submission, which seems relevant in the current climate, is reminiscent of the Radio Active watch design previously sold by Tokyoflash Japan. The nuclear themed display shows hours 1-12 across the bottom, groups of 5 minutes, 5-55 in the top left section and four single minutes in the radioactive symbol in the top right. The effect is something that looks like a display for measuring radiation levels.

The case of this watch design is laid out asymmetrically creating an industrial appearance and is finished in black. The design has a charging indicator so would presumably be a USB rechargeable watch. The design has an animation which can be viewed in video below.

Surprise, surprise if the comments section on the product page were an accurate reflection of consumer sentiment, the Radiation Level Watch is attracting healthy interest from a broad audience.