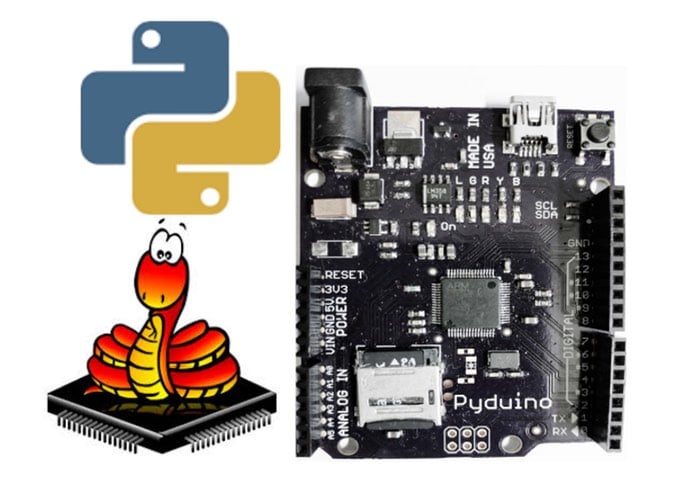 Arduino enthusiasts or those that would like to use the Python programming language with an Arduino-based development board, may be interested in a new piece of hardware which has been created by Nitin, called the Pyduino.

Pyduino takes the form of a small Arduino-based development board which is capable of running and supporting MicroPython. While still allowing you to use Arduino shields to expand the functionality of your projects, and program them using Python.

The creator of Pyduino explains a little more about its creation, design and functionality.

Why and how of Pyduino. I use Arduino extensively. It is easy to get the project done with the variety of shields on hand. However, it was a challenge trying to teach my 10-year-old Arduino programming. That said, I observed he could zip through the Python tutorials on code academy pretty easily. When I saw MicroPython for the first time I just asked myself: “Can I use my Arduino shields with this?” And that’s how Pyduino was born.

Pyduino is MicroPython board in Arduino shape. It is pin to pin compatible with Arduino, moreover, you can use all pins with Arduino names. Pyduino is much more than typical Arduino. Pyduino offers 12 Analog pins, 3 serial ports 2 can-bus ports , two I2C ports and much more.