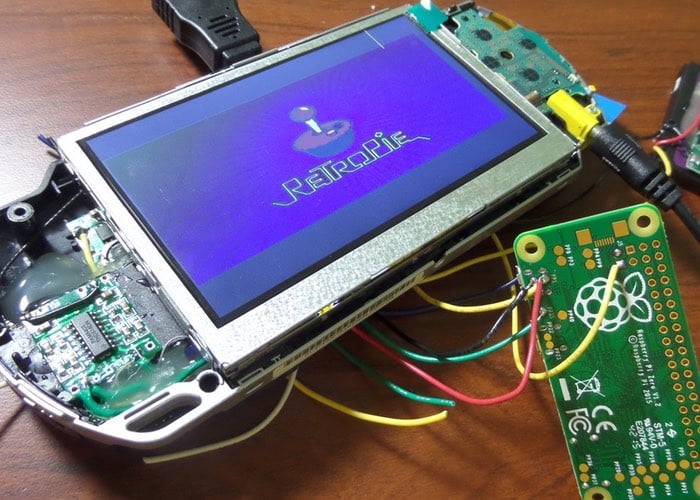 If you fancy creating your very own portable Raspberry Pi Zero games console you might be interested in a PSPi Version 2 build which has been published to the otherMod website and list everything you need to get with full instructions on how to build your very own.

Features of the Raspberry Pi Zero build include :

– 4.3″ Composite LCD (This is from a backup camera LCD that I’m happy with so far)
– Completely gutted, only original parts are the buttons and button boards.
– GPIO audio output with Class D stereo amplifier
– Working miniUSB port on top
– The Sony Memory Card converted to microSD and wired to the Pi Zero
– Original power jack is used to charge
– Momentary press of power button turns the console on and off. Pushing the button when the Pi is on shuts the OS down and powers the system off.
– Controls wired directly to GPIO pins
– 2 cell phone batteries in parallel for extended play time
– Low battery warning LED
– Analog joystick will work! Uses an analog to digital converter.

Welcome to the PSPi Version 2 complete build page. Another dead PSP is being given a second chance. The main goal with this project is to spend as little as possible on the components. When possible, I will create instead of purchase, and I’m making tutorials along the way that should be helpful for any Pi project. This one will have all the same features as Version 1 and even a few more. I’m documenting every part of it with photos, and if anyone wants more information on any part of it I’m happy to respond to questions.