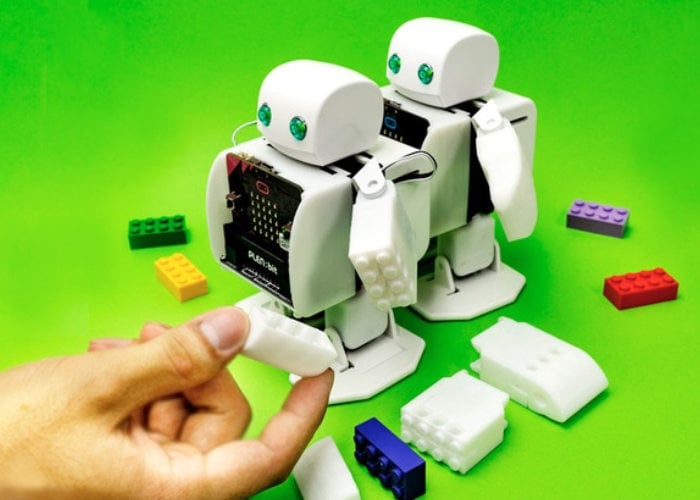 Building on their previous Kickstarter campaign the team responsible for creating the small programmable robot PLEN:bit powered by the BBC micro:bit development board have taken to Kickstarter once again to launch their latest project for the small humanoid robot. Once assembled anyone can easily program the sensors and LEDs to control the robot’s emotions and reactions thanks to a PLEN5Stack : PLEN:bit and M5Stack collaboration. Watch the video below to learn more.

“We were able to get M5Stack official support. PLEN5Stack is a developer edition. For those who are familiar with electronic work and programming. When combined with M5Stack, it can be developed in Arduino environment, and it is possible to use M5Stack’s various functions and libraries. You can also develop IoT and AI. With a temperature sensor or wifi you can alerts or send notifications to PC depending on the temperature. The temperature sensor is attached to the arm and connected to M5Stack.”

“The micro:bit is an educational single-board chip made in England, which the PLEN:bit utilizes as its brain. Beginner or advanced, regardless of ability, anyone can freely and easily program the sensors and LEDs in the micro:bit to create your robot’s motions and reactions.”

Early bird pledges are available from £184 offering a 20% discount off the recommended retail price which will take effect once the crowdfunding campaign comes to a close. Worldwide shipping is expected to take place early next year.