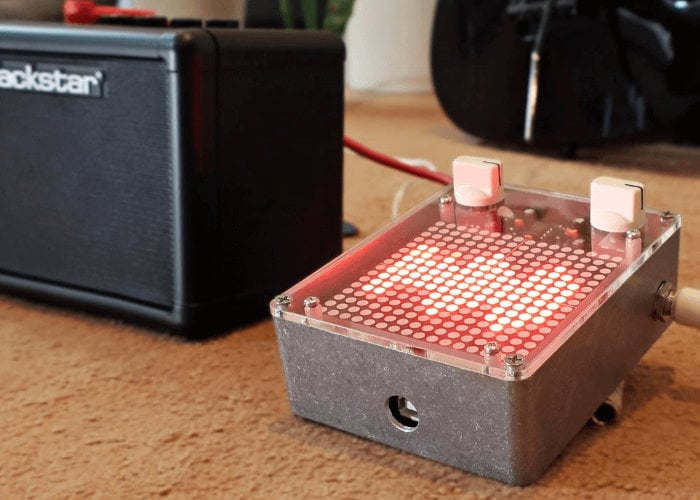 The ElectroSmash website has featured a new Arduino Audio Meter which takes the form of a programmable guitar pedal based on the Arduino UNO development board. Providing users with the ability to read the incoming audio signal and create effects on the four 8x8 LED matrices. check out the video below to learn more 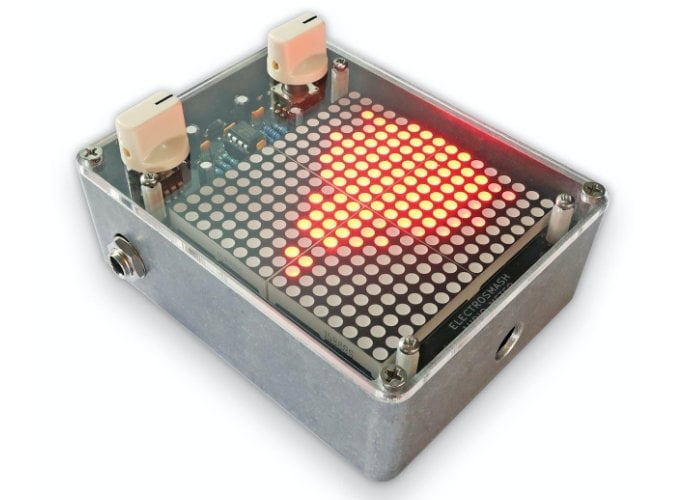 Features of the ElectroSmash open source programmable guitar pedal include:

– Analog Input Stage: The weak audio input signal is amplified and filtered, preparing it for the Arduino UNO ADC (Analog to Digital Converter). A rail-to-rail operational amplifier is used (MCP6002) to amplify the signal (2 to 30 times depending on the Gain potentiomenter) so any audio input signal could be used.
– 8x8 LEDs Matrices and Drivers: Four “common anode” matrices are used creating a 16x16 display. Four MAX7219 chips are used to drive the matrices. The communication between Arduino UNO and the LEDs is made using 3 lines DIN (Data IN), CLK (clock) and Load. The standard Led Arduino Library (LedControl.h) is used in most of the examples.
– Power Supply: Using four 8X8 LED matrices makes a total of 4x8x8=256 LEDs, because of that the current could rise up to 500mA (Vin=9 to 12V). This is why we use a VXO7805-1000 (capable of 1A max. output current). A more standard 7805 could also be used but it gets hot.