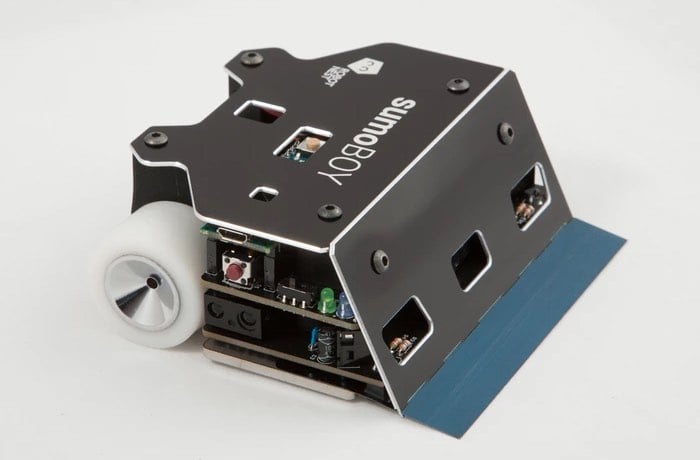 With the announcement that Robot Wars will be returning in the UK as a new TV series I am sure many have wished they could enter but may lack the robotic skills to get the main battle robot mechanics up and running. Or if you have already started designing and building your very own battle robot you may be interested in a new Arduino robotic kit called SumoBoy.

SumoBoy provides you with a quick way to get your robot up and running without having to worry too much about the robotic components of your design. Allowing you to concentrate more on weapons and defensive mechanisms that will help you and your robot get through the preliminary stages without getting destroyed, all for education of course.

The SumoBoy robotic kit consists of a programmable fighting robot combined with a prototyping board allowing you to customise it to meet any design criteria you may have. Watch the promotional video below to learn more about its design, inspiration and functionality.

SumoBoy is a multipurpose Arduino-based robotics kit for sport and education. A team of die-hard robotics enthusiasts has come together to create the world’s first mini sumo robotics kit and is launching a Kickstarter campaign to raise money for mass production with the aim of popularizing robot sumo worldwide.

The goal of SumoBoy is to Kickstart hundreds of new sumo-robot communities all around the world. To push the competition to the next level by introducing new crowds to the scene of robotics. And send a message to the youth that programming and electronic engineering can be a fun and exciting path to choose!

Robot sumo is a sport- where two robots attempt to push each other out of a ring (in a similar fashion to the sport of sumo). The competing robots are called sumobots. The main challenge and the excitement lies within their autonomy – they are not remote controlled during the battle. And the winner is the one with the best strategy chosen prior to the competition.

SumoBoy uses the well-known Arduino micro controller that can be programmed in C or C++ to successfully execute the winning strategy. However, the SumoBoy Kickstarter Kit is more than just a fight robot. While the robot itself is intended for tournaments, we have also included the prototyping board that serves as a perfect platform for learning the fundamentals of electronics and programming. Over the years of making robots and organizing youth workshops, we have gained a lot of experience and insights into what should define the essential sumo-robot experience for both beginners and experts. That’s why we decided to place equal emphasis on both – the competitive and educational aspects of sumo robotics. Using the prototyping board, everyone can play around with dozens of components, combine them into numerous algorithms and learn how to program in order to run their fun projects.

Jump over to the Kickstarter website for more details and to make a pledge to own one from $330.  If you liked this you might also be interested in building an Arduino wind speed meter.