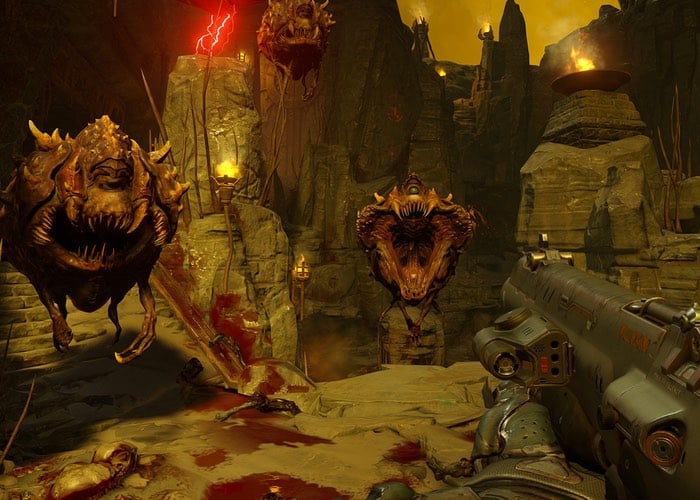 DOOM fans looking forward to the arrival of the latest game in the series and will be playing it on their Xbox One consoles, may be interested in a new limited time promotion that allows you to receive free copies of both DOOM 1 and DOOM 2 games when you preorder DOOM for Xbox One via the Xbox online store.

DOOM developed by id Software, the studio that pioneered the first-person shooter genre way back in the 1990’s and creators of the multiplayer Deathmatch, have created a new title in the series as DOOM returns as a brutally fun and challenging modern-day shooter experience that will be available to play from 13th May 2016 onwards.

Pre-ordering the latest DOOM game will also provide you to access to the Demon Multiplayer Pack offering a demon themed armour to adorn during battles. Microsoft explains more about the DOOM pre-order promotion below.

Get a closer look at the adrenaline-pumping, single-player campaign in the latest trailer for DOOM – the all-new FPS from id Software arriving worldwide on Xbox One, PlayStation 4, and PC on Friday, May 13th. As the iconic DOOM Marine, you wake to learn that the Union Aerospace Corporation’s facility on Mars.

For a limited time, pre-order DOOM and receive DOOM I and DOOM II. The codes will be delivered to your Xbox message center in 7-10 days. You can redeem your codes on Xbox One or at xbox.com/redeemcode. Pre-order now and also receive the Demon Multiplayer Pack, which includes one, unique Demon-themed armor set with three skin variations, six Hack Modules—one-use consumable perks—six exclusive metallic paint colors, and three id logo patterns that can be applied to weapons and armor.