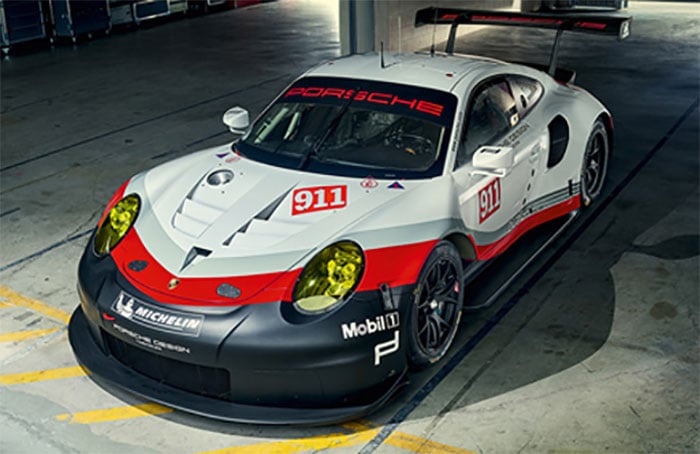 Porsche has unveiled the all new 911 RSR racing car in LA and this beast is very different from the other 911 race cars and streetcars out there. On the surface it looks very similar, but underneath the flat-six engine is pushed ahead of the rear axle making it a mid-engine car.

The 911 has traditionally been a rear engine car with the motor behind the axle. Porsche calls the change the biggest evolution in the history of its top GT model. Other than a moved engine, the car has new suspension, body structure, aerodynamic concepts, engine, and transmission.

The engine in the racer makes 510hp and has paddle shifters for the 6-speed transmission. The car will be raced during the 2017 season at 19 events with over 140 hours of racing. “For the 911 RSR, we deliberately focused on a particularly modern and light normally-aspirated engine, as this gave our engineers immense latitude in developing the vehicle,” explains Dr. Walliser. “Apart from that, in principle, the LM-GTE and GT Le Mans class regulations stipulate the absolute equality of various drive concepts, as the torque characteristics of turbo and normally aspirated engines are aligned.”