In an exercise that dispels the myth that the papacy is behind the times, Pope Benedict XVI activated a giant Christmas Tree light display in the faraway town of Gubbio with an Android tablet. How is this news important? First, it’s a publicity boost for Android. Second, maybe the fact that blessed holy hands are upon a touchscreen (Sony Tablet S) gives the gadget a saintly aura. Maybe, just maybe. Also: Horrors! He’s not using an iPad! That’s right, the Pope is rocking a Sony.  The real high tech part that out-geek’s cutting edge Silicon Valley is the Pope’s little viral stunt happened over a live feed where he watched the Christmas tree light up. 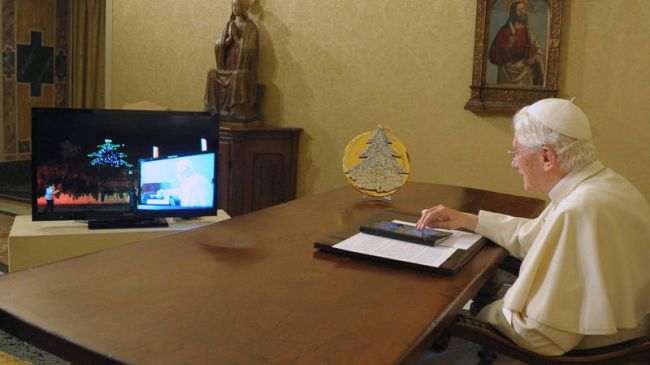 Turns out the town of Gubbio has been ‘sponsoring’ their giant tree for almost thirty years now. The tree itself is a grandiose light display spread across a vast hillside. it’s reportedly the biggest on Earth.

The real funny part is right next to the story on the Pope going Android are a selection of insipid showbiz offerings. One of them goes: ‘Care for a dip? Selena Gomez canoodles poolside with boyfriend Justin Bieber.’