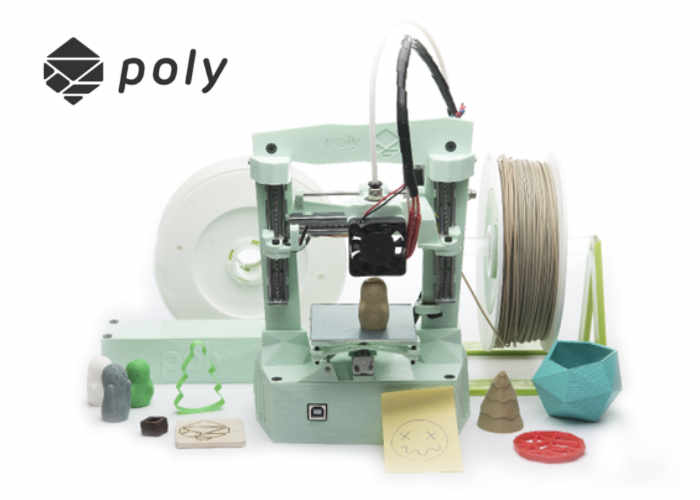 A small portable 3D printer and multitool engraving system has been launched via Kickstarter this week which offers a unique battery-powered fabrication machine that is biodegradable and uses open source firmware and software. Watch the demonstration video below to learn more about the Poly desktop 3D printer which is being created by Poly 3DPrinter based in Mercogliano, Italy.

Poly is a multitool 3D printer that uses open source firmware and software, made in PHA, a totally ecological and compostable material. The concept behind Poly is based on three keywords: open-source, eco-friendly, and upcycling. Poly is equipped with a range of tools: an extruder nozzle, a laser engraving kit, a chocolate extruding kit, and all of them can be quickly alternated by a magnetic mechanism. It has a printing area of 6cmx6cmx6cm and it can create, in addition to countless plastic objects (in PLA), designs and chocolate shapes.

The first prototype of Poly was 3D printed. However, thanks to our partners, we could find an eco-friendly and organic material (PHA) to use by injection molding technique. Unfortunately, the mold cost are pretty high, around 40 thousand dollars, so our goal has been affected by this. Anyway, we are ready to make a large production of Poly, and we are going to do this in the established shipping time thanks to a deep research in production and logistic.

Visit the official Kickstarter campaign page via the link below, for full specifications and pledges which start from €254 with shipping expected to take place during September 2018.