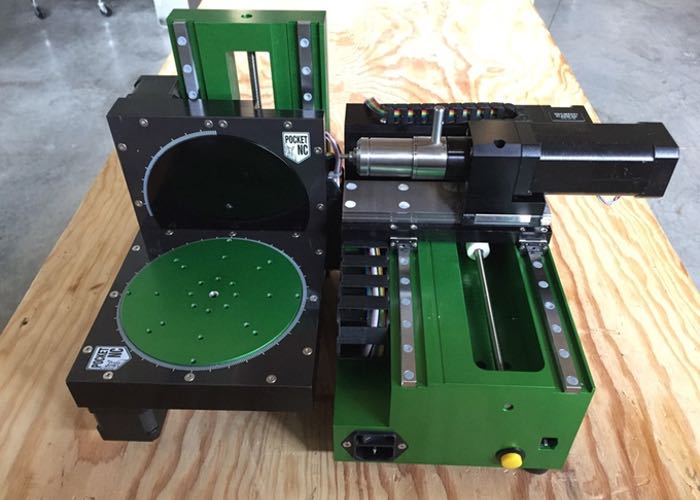 Pocket NC is a new mini desktop CNC milling machine that has been in development for the last 4 years and has now launched on Kickstarter looking to raise $70,000 in funding to go into production.

Watch the video below to see the Pocket NC CNC machine in action and its ability to cut and form intricate shapes using its 5 axis cutting system.

The Pocket NC is capable of cutting anything up to the hardness of aluminium, including wax, wood, plastics and more.

5 Axis: If you are having a hard time visualizing what “5 axis” could mean, don’t worry. It’s a lot more simple than it sounds. Conventional milling machines typically can move in 3 linear axes at a time. An example of this would be a milling machine where the part fixed to the table can move back and forth in two directions (X and Y axes) and the cutting tool can move up and down (Z axis).

The extra 2 axes of movement are rotational, which for the Pocket NC means that the part can also rotate about the X axis (A axis) and about the Y axis (B axis). The main advantage of this is that you can now machine on multiple faces of the part without having to refixture it.

So if you think Pocket NC is something your projects and making could benefit from, visit the Kickstarter website now to make a pledge from $3,300 and help the Pocket NC CNC machine become a reality.