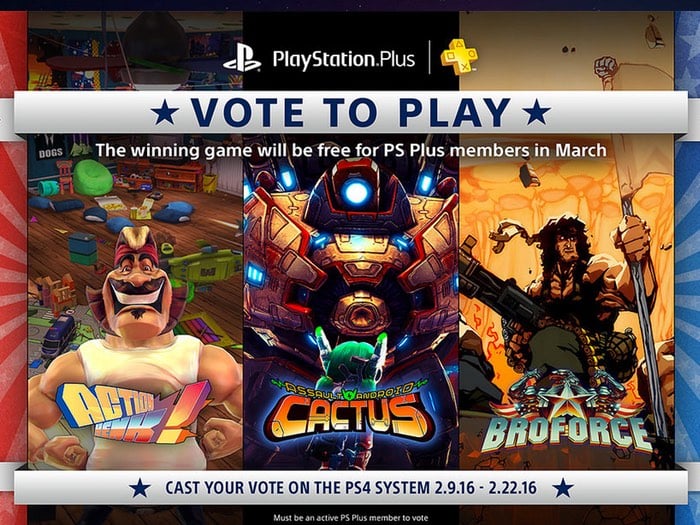 Greg Lewickyj PlayStation Plus Content Partnership Manager has taken to the official PlayStation blog to explain more about what you can expect from the games that will be available to vote for.

Publisher Curve Digital and developer RageSquid have put together a light-hearted racer where you run, jump, and — yes — butt-slide your way through a host of toy room environments with past-their-prime action figures. It’s a game where timing and momentum are key as you attempt to outdo your opponents as well as your own past performance. How can you not love a game with the tagline “Butt-slide to victory?”

While the mechanics of this twin stick shooter will be familiar to many, developer Witch Beam has created a unique battery mechanic (in lieu of lives), providing a fresh experience that helps Assault Android Cactus stand out from the crowd.
This one also supports Shareplay, a “virtual couch” that lets a friend join your game for up to an hour at a time, creating an online local co-op experience. According to designer Sanatana Mishra, the goal with Assault Android Cactus was to make a game that he and the rest of the team wanted to play.

While we didn’t know it at the time, Broforce is the game that we always wanted as we cheered beloved 80’s-era action heroes on to victory. Publisher Devolver and developer Free Lives have teamed up to deliver part irreverent spoof and part loving homage to what are now classic movies and classic games. With its online co-op experience and over-the-top presentation, there’s a really great game here that deserves the heaps of praise it’s already received.

For more information on the new Vote to Play system jump over to the official PS Blog website for details via the link below.