Okay, fine. It’s not a genuine ‘dental weapon’ but a shiny new spin on the battery-powered toothbrush that’s supposed to take over flossing duties. Since modern science is generally preoccupied with defeating bacteria–the unseen bogeyman more insidious than cancer or any other disease–Philips has now set its sights on what’s thriving between your teeth. Say hello to Sonicare. 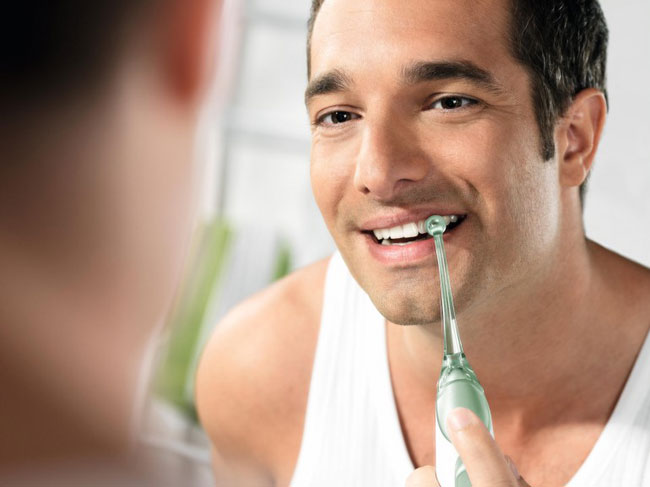 It’s full name is Sonicare Airfloss, a lithium-ion battery-powered affair operated at a press of a button. As seen above, it has interchangeable heads, all of which can squirt minute jets of water and air into the corners of your teeth. See, that’s where the nasty creatures tend to reside. The Sonicare is just a single example of what Philips showcased during IFA 2011, which is one of the biggest consumer electronics events on the face of the Earth.

The promotional literature claims that a short session with the Sonicare Airfloss is like spending several minutes flossing your teeth. To be honest, flossing is an activity that should never become out of date. Just ask your dentist. It’s time-consuming for sure, but despite high-tech gadgetry like the Sonicare, flossing should still be done regularly, apparently.

So it’s either floss on a healthy as is or chew a twig, which is flossing old school.

Anyway, the Sonicare Airfloss is now selling for $89.99.