A new project has launched over on the Indiegogo website this week, which has been designed to allow you to transform your Arduino projects into permanent devices.

Permaduino has been created to provide and easy way to go from Arduino project to custom personal gadget, without having to worry about power. Watch the video after the jump to learn more about the Permaduino project and see it in action. 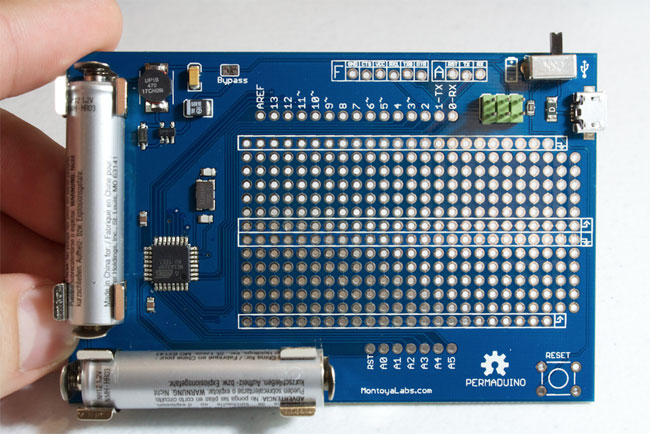 “I’ve been working with Arduino projects for the last three years and while I love the platform, I think it lacks an easy way to turn prototypes into permanent items.We started the campaign because we need enough money for the first production run of Permaduino. If we don’t do a big enough production run Permaduino would be way too expensive. All the design is done, we just need some testing of the final boards before going into production.”

Permaduino is an all in one Arduino compatible board, designed for deploying your creation rather than development and includes features such as: Powered from 2xAAA Batteries,  5V Boost regulator up to 180mA, Permanent breadboard with 25 Columns, GND and VCC lines along the board, Based on the Atmega328P, Designed to fit inside 8mm video tape cases, Programmable via FTDI, AVR-ISP and an Arduino and comes complete with mounting holes.

The Permaduino project is currently over on the Indiegogo website looking to raise enough pledges to make the jump from concept to production. So if you think Permaduino is something you could benefit from, visit the Indiegogowebsite now to make a pledge and help Permaduino become a reality.