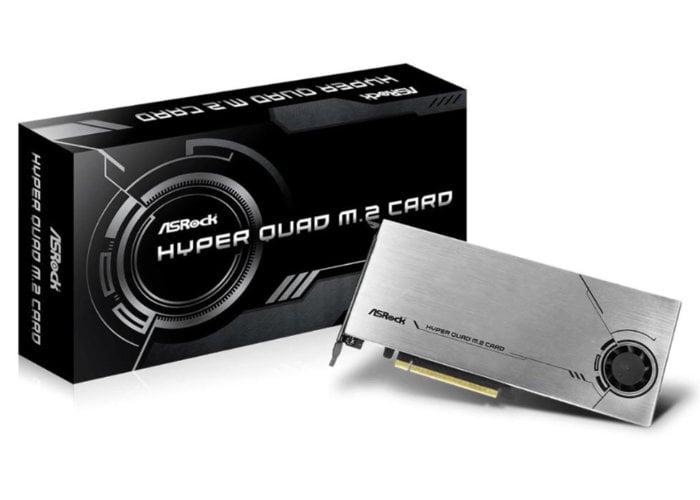 “Supports up to 4 PCIe Gen3 x4 NVMe M.2 SSDs on AMD TRX40/X399 platform and Virtual RAID on CPU (VROC) technology on Intel X299 platform. Allows you to create a bootable RAID array with up to 4 M.2 SSDs. Apart from the large aluminum cover, the 5cm cooling fan can not only quickly dissipate the heat but also lower the temperature to ensure a stable performance of M.2 SSD. What’s more exciting, the fan speed can be adjusted via a switch located on the PCB, giving a more flexible usage.”

“The 11-cm-long thermal pad is able to fully cover every NAND flash on M.2 SSD, transferring heat generated by the high speed M.2 SSD onto the aluminum cover. Extend the longevity of each devices. The onboard four M.2 sockets are laid out on PCB at an angle (45 degrees). The shape is optimized to keep the traces as short and direct as possible. Designed with the right trace shape in order to make sure each M.2 socket carries good enough current, thus providing maximum performance and stability.”

Features of the Hyper Quad M.2 card include :