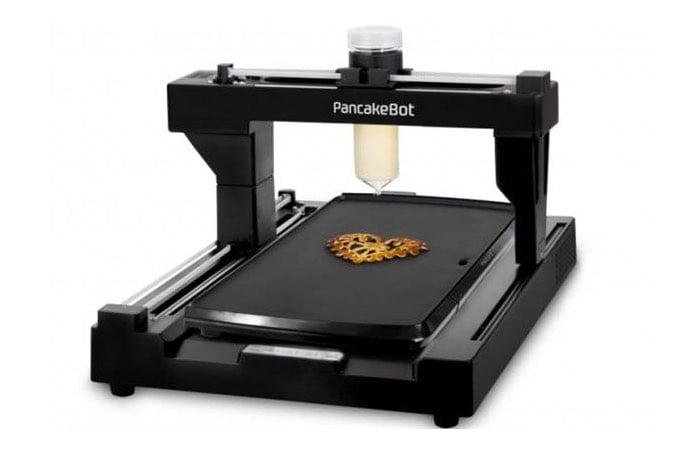 After first being unveiled a few years ago the pancake 3D printer that is capable of creating pancakes in almost any design or shape that you can think of is now ready for a consumer launched and has been showcased at this year’s 2016 International Home and Housewares Show in Chicago.

The pancake 3D printer consists of a heated hot plate that essentially acts as a breakfast griddle and is fitted with a pancake batter extruded which is then used to create the designs to a maximum of 17.5 x 8.25 inches in size.

The PancakeBot is now available to order priced at $300 and shipping of pre-orders seems to have already started. Check out the demonstration video below to learn more.

In 2010, Norway-based dad and breakfast food enthusiast, Miguel Valenzuela built a pancake printer for his daughters. In 2014, StoreBound acquired the rights to Valenzuela’s PancakeBot and the associated Intellectual Property and has been working with the inventor to bring the PancakeBot to market.

The PancakeBot is the world’s first 3D food printer capable of printing pancakes by automatically dispensing batter directly onto a griddle in a shape of the user’s choosing. Designs for printing can be loaded to the PancakeBot via SD card. Representing an evolution in food-printing technology, PancakeBot lets kids and adults express their creativity through food while exploring technology.

For more information on the new PancakeBot jump over to the official website for details via the link below.