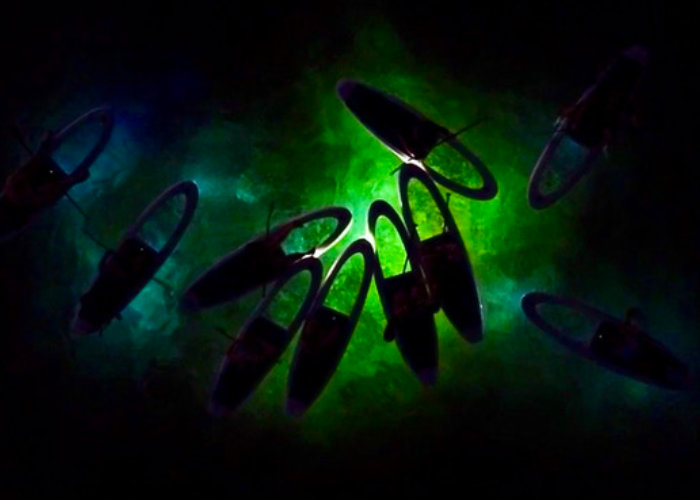 If you wish you could see through your stand-up paddle board or SUP to view the underwater life directly beneath your feet, you may be interested in a new paddle board created by LightSUP. Check out the demonstration video below to learn more about the unique design of the windowed paddle board which is also equipped with LED lighting allowing you to explored the depth during the night as well as the day.

“Our labor of love started in a beach shack on the Big Island of Hawaii. We have been involved in the SUP industry since its infancy. LightSUP Boards was born from the mind of an ingenious girl who was tenacious in her pursuit to make her board a reality! Mask on, face hanging over the board looking at the fish below year after year was our break time ritual. On a summer day in the shack while replacing the VU window in a boogie board, this 11 year old watching suddenly asks, “Dad why can’t we put a window in a SUP so I can look at the fish and paddle at the same time?” “That’s a very good question…. Maybe we should try.” A few weeks later, she asked if we could work on a design. We did, and that was that!”

“It wasn’t until after an abysmal summer rental season in 2017 that we realized, if we were going to continue making a living by stoking out guests on the ocean we needed a change. We needed her board to become a reality. After a year in development and several prototypes later, we tested our first prototype in February 2018. In October 2018, we began our Proof of Concept by starting a LightSUP guided tour on the Big Island @lightsuphawaii. We have been overwhelmed by the response we’ve gotten by our Ohana, guests, passer byes, and our Social Media Ohana! ”