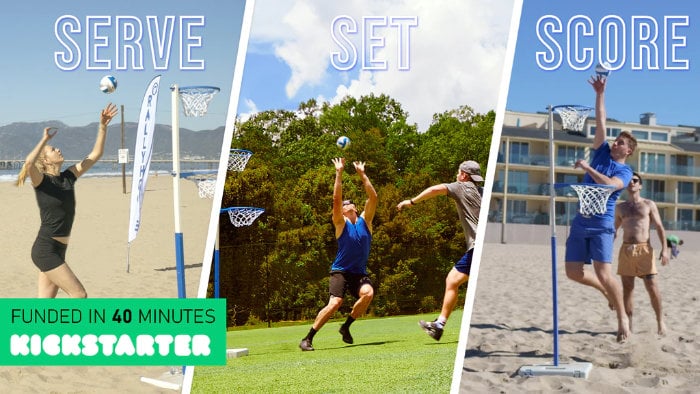 RallyHoops is a new outdoor game that combines both basketball and volleyball, providing a portable sports game that can be played almost anywhere whether it be on sand or concrete. Launched via Kickstarter campaign is already blasted past its required pledge goal with still 10 days remaining on its campaign.

Specially priced early bird pledges are now available for the innovative project from roughly $169 or £120 (depending on current exchange rates). If the RallyHoops campaign successfully raises its required pledge goal and the project completion progresses smoothly, worldwide shipping is expected to take place sometime around July 2021. To learn more about the RallyHoops outdoor game project checkout the promotional video below.

“RallyHoops is a fast-paced, four-player (2 v. 2) game that is quick to set up, easy to grasp, yet difficult to master. Our full-court game is played with two different-sized hoops on each side of the court. There are different scoring options, depending on who scores in which hoop, but a team has no more than 3 hits per team rally. Games are played to 21 points, but that doesn’t mean the game is over! Each player on the trailing team has 1 redemption shot to rally back and continue the game!”

Setup and play outdoor game for kids, families and friends :

– Lay the RallyHoops set on the ground and unhook the silicone bands from the bases
– Remove the 4 hoops and 2 poles
– Press the buttons located on the bottom of the pole and insert it into the top of base; do the same with your second pole and base
– Slide the inner pole up until you hear a “click” for our standard(6’/4′) height and a second click for our advanced (7’/5′) height.

For full instructions on how to play all the different modes of the RallyHoops outdoor game has to offer, jump over to the official Kickstarter project.

“At this point, we have a quality product, a growing brand, and a fun game with detailed rules. We also have an established company, partnered with a valued manufacturer, filed patents and trademarks, and tested numerous prototypes. Now we’re prepared to fulfill the first large order of RallyHoops and start building a community of RallyHoops players nationwide!”

For a complete list of all available pledges, stretch goals, extra media and technical specifications for the outdoor game, jump over to the official RallyHoops crowd funding campaign page by following the link below.