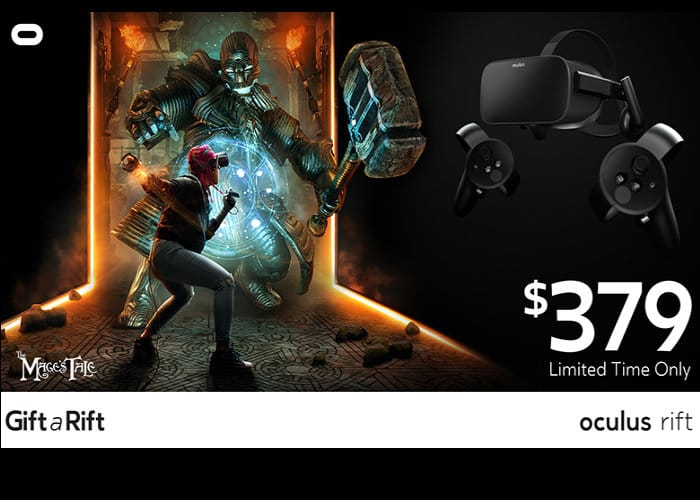 Oculus has announced a new holiday Oculus Rift VR bundle which is now available to purchase for a limited time priced at $379 or £369 until 11:59 pm PT December 20th, 2017. Oculus is also offering discounts of up to 80 percent or more on 250 titles and three dynamically priced seven-game bundles starting at $89.99 from its Oculus Rift virtual reality online store allowing you to get up and running with you new VR hardware as quickly as possible and saving cash in the process.

Oculus explains more about their latest Oulus Rift bundle which is now available to purchase in time for the holiday season :

This limited-time promotion gets you everything you need for the best VR gaming experience, including:

– Touch controllers to navigate zero-G, take down zombies, or direct your friends in combat
– Integrated 360° spatial audio for the most immersive experience possible
– Two sensors (Pro Tip: Pick up a third sensor to unlock full room-scale potential)
– Access to amazing games, creative tools, and more, including growing esports titles like The Unspoken and AAA arcade shooters like Robo Recall

Select stores are also offering discounts, including Best Buy, Amazon, and Newegg. Promotions may vary, so check with your local retailer for details.