The development kits for the new Oculus Rift virtual reality headset shipped earlier this month, but if you haven’t had a chance to put them through their paces but would like to learn more about the Oculus Rift headset.

The following Oculus Rift Tuscany Razer Hydra demonstration will shed some more light on what the Oculus Rift virtual reality headset is capable of. Watch the video after the jump to see it in action. 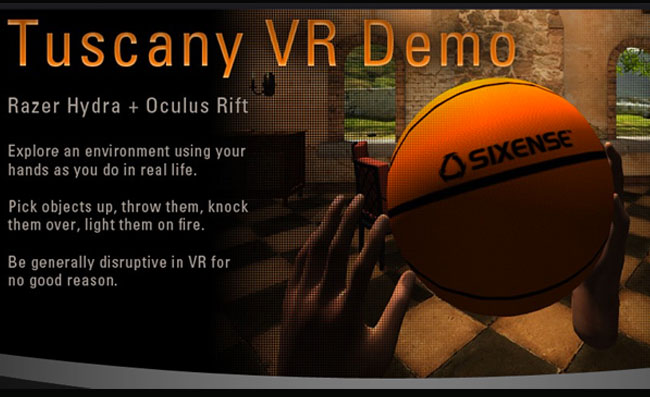 Sixense makers of the Razer Hydra has developed a user-friendly virtual reality design program called MakeVR, which has been built from the ground up for the Oculus Rift and Razer Hydra support. Paul Mlyniec, Lead Developer of MakeVR

“MakeVR incorporates a powerful 3D CAD engine capable of importing models from other 3D design applications. Imported objects can be combined with the objects created in MakeVR to construct virtual 3D worlds. “I was surprised to hear that one of our developers is making hundreds of dollars each month creating and selling virtual goods in one of Valve’s popular games,”-“MakeVR will be a tool that facilitates this type of creative expression.” MakeVR will also include specialized tools to prepare objects for 3D printing, such as tessellation, healing, and hollowing. MakeVR can export objects in .stl format, suitable for 3D printers.”

Unfortunately no information on pricing or worldwide availability has been released as yet, but as soon as information comes to light we will keep you updated as always

“At GDC 2013 we stepped into the Oculus Rift Tuscany demo with full Razer Hydra integration implemented by Sixense. The resulting experience is the most fun we’ve had in VR yet”