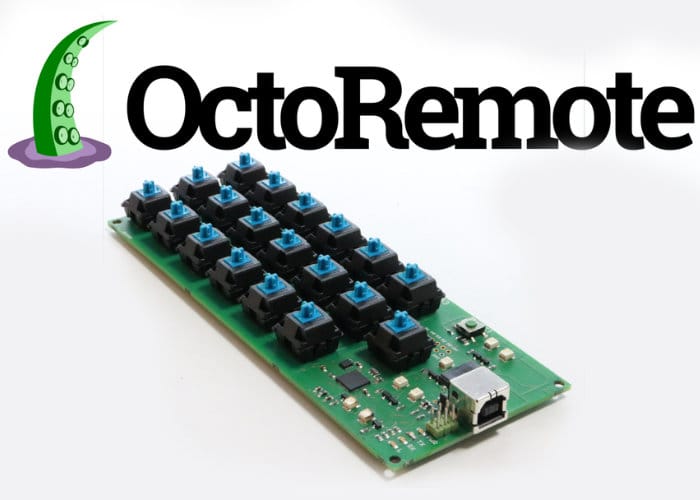 Developer Manaz located in Bielefeld, Germany has created a new hackable keyboard in the form of the OctoRemote which can be used to control your 3D printer or a customisable input device thanks to its Arduino compatible keyboard. Watch the demonstration video below to learn more about the OctoRemote which has this week launched via Kickstarter to raise the €30,000 needed to take the design into production.

The OctoRemote hackable keyboard is available to back with early bird pledges starting from €40 or £35 and will start shipping out to backers during October 2018. Specifications of the unique keyboard development board include a ATMega32U4 microcontroller with built-in USB HID support, 19 CherryMX Blue mechanical keyboard switches, 8 status LEDs, Arduino Pin 13 LEDs, 2.54mm expansion header, ISP header and Reset button.”A set of 8 clear plastic cylinders for increased visibility of the leds. Fits the 3D printed OctoRemote case or can be shortened if you want to build something different.”

The OctoRemote has been created to plug directly into your existing OctoPrint setup via USB and connects to it by an easy to use Plugin. Once installed it allows users to control all the basic functions of their 3D printer such as axis movement, extrusion, retraction and homing using a simple button press. Further functionality can also be added enabling the OctoRemote to control print jobs, multiple extruders and up to five user programmable keys for sending custom GCodes. “In addition the OctoRemote can be reprogrammed using the Arduino IDE, allowing you to build custom input devices of any kind. The complete design and sourcecodes will we be made available as open source after the campaign is funded. When the stretch goal is reached a library for the Arduino IDE will be released as well to allow even easier programming.”

For more information and full specifications jump over to the official OctoRemote crowdfunding campaign page by following the link below.