Not too long ago, @evleaks posted the press render of the alleged NVIDIA Shield Tablet we’ve heard so much about in the past few weeks.

A new report reveals the specifications of the alleged NVIDIA Shield Tablet as well as its complete set of specifications, pricing and availability. Read on.

The purported NVIDIA Shield Tablet will come with a 8-inch IPS display sporting a resolution of 1920 x 1200 pixels. It will be powered by NVIDIA’s own Tegra K1 processor, and will come in both WiFi and LTE flavors. As far as the storage is concerned, the WiFi model reportedly features 16GB of internal storage while the LTE + WiFi model offers 32GB of memory. Both versions come with a microSD card support of up to 128GB. 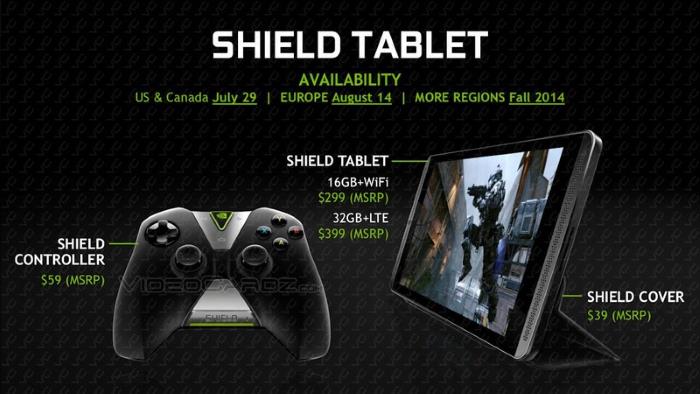 The report mentions the tablet will be announced in the US and Canada on July 22nd, with availability set to July 29th. The alleged tablet will hit retail in Europe on August 14th, followed by other regions in the fall of 2014.

As far as the pricing is concerned, the 32GB LTE variant will come with a $399 price tag, while the WiFi only model costs $299. There’s no official word from NVIDIA about it, but let’s hope its true.

We’ll update you as soon as it gets official.