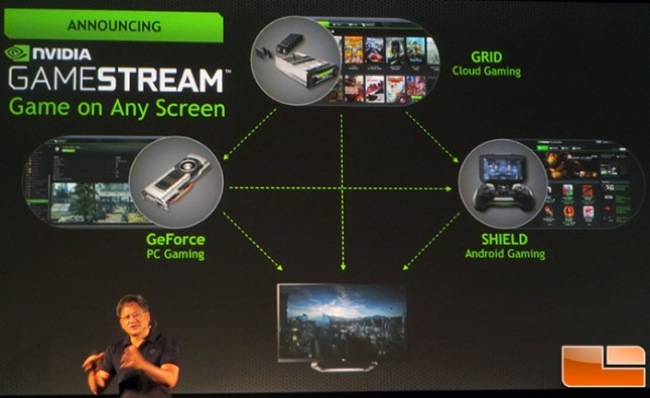 The new Nvidia Gamestream service will support nearly all GeForce GTX PC graphics cards as well as supporting over 50 PC games, when it roll out as a final release on October 28th and is currently the only handheld games console that supports the new game streaming service.

Nvidia’s head Jen-Hsun Huang says the new Nvidia Gamestream service has been created to enable the Nvidia GeForce Experience software to pair with Nvidia’s graphics processors and the Shield console to push streaming gaming into the living room. Check out the hands on Nvidia Gamestream video below, created by the guys over at Engadget to learn a little more about the new service.

To re-cap the awesome Nvidia Shield handheld games console is powered by a Nvidia Tegra 4 processor and comes with Android Jelly Bean, and features 2GB of RAM and a console grade controller with dual analog joysticks, a full-sized D-Pad, left and right analog triggers, full-sized bumpers and A/B/X/Y buttons and is now available to purchase for $299.

Its thought that after the new Nvidia Gamestream service launched that Nvidia might look to make the new service available to other Android devices that are equipped with a Nvidia Tegra 4 processor.