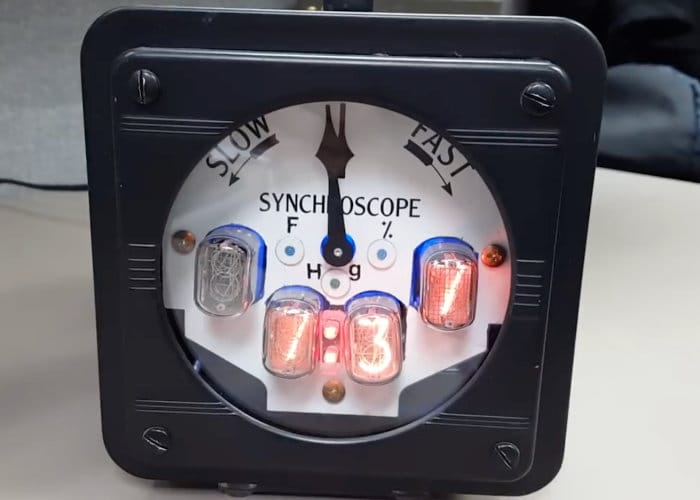 Makers and hobbyists searching for inspiration for their next project, may be interested in this awesome build which uses an old nuclear power plant indicator, Nixie tubes and an Arduino Mega-development board. The four Nixie tubes have been designed to alternate between the time, temperature, pressure, and relative humidity, in addition to a clock-like hand as a secondary indication of atmospheric pressure.Check out the video below to learn more about the Nixie clock weather station.

The project has been built by Instructables member “badjer1” who explains a little more about the project and its inspiration “ I wanted to build a Nixie clock driven by an Arduino and found a few places on the internet, but none were 100% complete to get it working from the beginning to end. I either found bad wiring diagrams, bad code in programs or bad supporting literature that really slowed down my progress, so I gutted it out, figured it out and came up with the following. Maybe someone can say well, you missed this or that… Hopefully i haven’t and I have given you enough here to let you find the mistakes. Anyway… this is my Nixie clock / Weather station.

I used a Syncroscope from a Nuclear power plant for the case. The clock displays the time from the top of the minute to 15 sec in, and then displays the temperature (F), then back to time until the bottom of the minute (30 sec.), then it displays atmospheric pressure (mm Hg), then back to time until 45 sec into the minute and displays relative humidity. Upon reaching 60 sec. it increments the time and repeats the cycle. The BMP280 has a very poor temperature sensing capability and is not nearly as accurate as a DS18B20 Waterproof Temperature Sensor that I used in another project of mine. I may just swap this out. Also I had a nice mesh cage around the sensors to protect them from damage and this too led to inaccurate results so I modified that as well. The indicator arrow is scaled for the low and highest pressures found in my state. the indicator arrow does a good job of showing changes in the pressure when a storm or clear skies are developing.”