Nissan has this month unveiled a new Smart rearview mirror which the company has created, that is the world’s first LCD monitor rearview mirror that provides both clear visibility under varying weather conditions and low light situations, but also enables the driver to switch between the LCD monitor and a traditional rearview mirror depending on a driver’s preference. 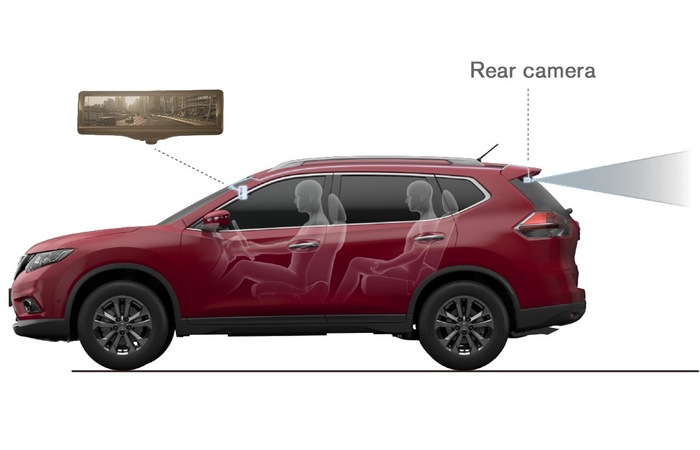 The new Nissan Smart rearview mirror has been unveiled and will be showcased at this years Geneva Motor Show which is currently under way. The Nissan smart rearview mirror is also fitted with a high-resolution camera mounted on the rear of the vehicle to provide the driver with a clear unobstructed view. Nissan explains a little, more :

“The Smart rearview mirror provides a wider and clearer view when compared to a standard mirror. The LCD monitor provides unobstructed images of the rear flanks, making traditional obstructions associated with traditional rearview mirrors, such as C-pillars, a non-issue. This helps the driver grasp the traffic conditions within the area in a much more efficient manner.

Also, conventional monitors possess an aspect ratio of 4:3 or 16:9, but these traditional-sized aspect ratios could not adequately be displayed in a rearview mirror. Therefore, an LCD monitor with a unique aspect ratio of approximately 4:1 was developed.”

For more information on the new Nissan Smart rearview mirror jump over to the Nissan press release website for details.